Mystery putter up for sale

Centre-shafted club from 1900 at Bonhams auction 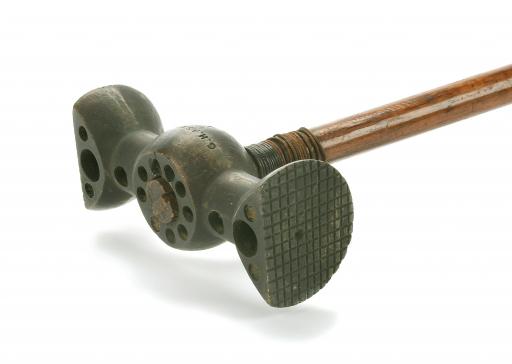 They say there's nothing new in golf, merely the players and the packaging and a centre-shafted putter dating from 1900 being offered at Bonham's Golf Memorabilia sale at Chester on February 24 is testimony to that.

It bears a strong resemblance to the Carbite Putterball training aid which Sergio Garcia endorses and which he says helps him achieve more accurate strikes of the putter head in competition play.

The turn-of-the century club being auctioned has an intriguing history. The maker is unknown and the putter is not recorded in 'The Club Maker's Art', the bible of golf clubs made around that time. Though it is stamped 'A.G.H. Askew', no-one of that name is recorded as a professional or club-maker so it's believed the club was made either for or by an affluent amateur.

The putter head is in the shape of a two-faced hammer and has 17
holes in the head, presumably to reduce the weight of an already very heavy club.

Bonhams reckon it most likely fell foul of the banning of centre-shafted putters following Walter Travis' win in the 1904 Amateur Championship, when the golf
authorities barred their use for at least a decade.

Also included in the sale is a watercolour painting of golf at St Andrews (1961) by Arthur Weaver, the doyen of golf artists and expected to attract bids between £2,000 and £3,000.

An unusual momento of the 1979 Ryder Cup matches is also for sale in the form
of a copy of 'The Story of American Golf,' signed by both captains
and all the US and Great Britain & Ireland players. The green leather bound book by Herbert Warren Wind - the man who invented the term 'Amen Corner' - has the Ryder Cup trophy and flags on the front cover. Wind travelled to the match at The Greenbrier, West Virginia, with the British Golf Supporters' Association and the memento is expected to fetch £500-800.