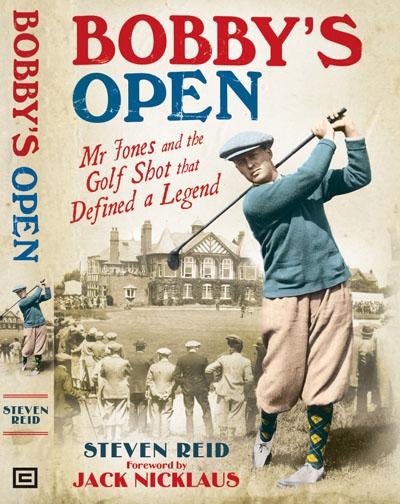 I’ve always had a soft spot for Robert ‘Bobby’ Jones - an inspiration for me in my career within the golf industry.

It stems from the time I was editor of Golf Weekly - a magazine formerly known as Golf Illustrated, first published in 1899 and which for many years hosted the Golf Illustrated Gold Vase, one of the leading UK strokeplay tournaments for amateurs.

In hindsight it was sacrilege but for the first few years of my incumbency, I inherited the eight-inch-high gold trophy which was kept in a wooden box under my desk when it returned from the engravers. It was only brought out for the annual tournament at Walton Heath.

It carried the names of legends of the game who had won it in the past including Abe Mitchell (depicted in miniature statue atop the Ryder Cup), Michael Bonallack (six times between 1961 and 1975) and Jones who won it in 1930 during his ‘grand slam’ year visit to the UK when he also won both the Open Championship and the Amateur to add to the US Open and US Amateur.

It served as a reminder of those halcyon, bygone days when people came out in their thousands in suits, flat caps and trilby hats to watch the superstar amateurs of the era.

Jones was perceived as golfing royalty and, as the author Dr Steven Reid reveals in his enthralling biography, was the most famous sportsman of his generation, adored by his fans but who was ultimately to suffer an illness which robbed him of mobility and thus pay a cruel price for his genius.

The book centres around the 1926 Open Championship at Royal Lytham & St Annes when Jones was chasing his first major title on British soil against the likes of Tommy Armour and Walter Hagen - recognised as one of the slowest players in the game, though not by today’s standards.

Reid reveals that the starting sheet for the third and final day shows that Jones and playing partner Al Watrous teed off for the first of two rounds (most in the pro ranks had to be back at their clubs by Saturday morning) at 9.18 am and for their second at 1.18pm.

“In between the two rounds they still had time to go back to Jones’ hotel for lunch and a rest,” says Reid.

And this, remember, was in the days of hickory shafts, uncontrolled crowds in their thousands gathering around the stellar groups, and course information purely gleaned from past experience and through the mouths of caddies.

The incident that gives the book its title came at the 411-yard 17th hole of the second round when Jones was neck-and-neck with Watrous and drove into a shallow bunker still 175 yards from the flag. His opponent’s ball was on the front of the green in two.

Using extensive research and eye witness reports of the time, Reid reveals how Jones hit a majestic escape to within a few yards of the hole and two putted for par while a shocked Watrous three putted - his challenge demolished.

A plaque remains to this day on the spot from which Jones hit his wonder shot and no doubt will be re-visited by players with a sense of history competing at Lytham next month.

If, like me, you’re a student of the game, Reid’s book will bring to life a heady mixture of professionalism and amateurism that was indicative of the sport between the wars.

It will also explain why a lawyer from Atlanta, Georgia, was treated with such high regard by an adoring public. The stories behind some of the images published are fascinating, too.

Dr Steven Reid is a noted golf historian, an expert on the career of Bobby Jones, and has been a member of Royal Lytham & St Annes Golf Club since 1965. He served as captain in 1996 and is currently chief medical officer for the R&A.

Bobby’s Open, by Dr Steven Reid and foreword by Jack Nicklaus, is published by Icon Books and priced £16.99.