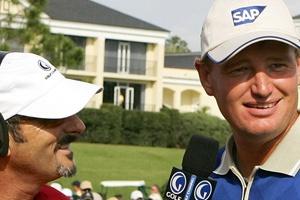 Ernie Els has hit back at Golf Channel and CBS Sports announcer David Feherty for his comments on the opening tee box at the Tavistock Cup in March.

The Irishman-turned-American, who introduced each player in the charity team event in Orlando with a sarcastic quip, told the crowd on the first tee that “Ernie will be putting with a live rattlesnake today.”

But the man they call The Big Easy, speaking in the July issue of Golf Magazine, was not happy.

“I’ve known David for a long time,” he said, “but for him to have said that was totally shocking and well, not out of character.

“He made the whole group very uncomfortable for the first few holes. It was a very shit feeling. It wasn’t a very classy move but then again it’s how he makes his living these days. He’s kind of a shock jock.

“I knew he was going to say something. Shock the world and get your two minutes of fame. At the end of the day, I screwed up in front of a lot of people on live TV but I’m still in the game. I didn’t quit.

“I’m still trying to win tournaments and majors ,and the people who are criticising you, their life journey was to play golf for a living and now they’re a journalist.

“I shouldn’t take it seriously but you can’t help but take it personally. If you’re going to take the piss out of me, fine, but don’t do it with a microphone in your hand and in front of the whole world.”

In response to Els’ comments, Feherty told Golf Magazine he did not intend to offend Els.

“I gave everybody a hard time at the Tavistock Cup and I did it in proportion to how much affection I have for the person,” said Feherty. “If that backfired with Ernie, I unreservedly apologise, because I love the guy.”

Click here if you missed the video of Feherty teasing the Tavistock Cup players.