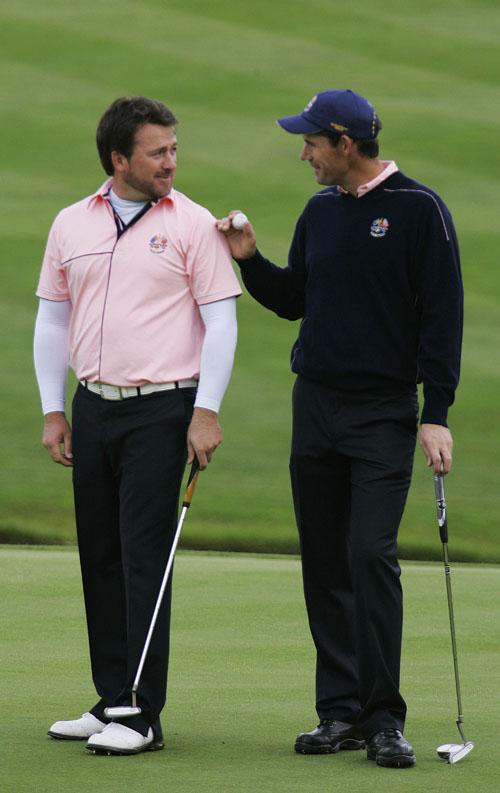 Like millions of golfers around the world, Padraig Harrington is constantly tinkering with his swing and his pre-shot routines. He knows that golf is never a game of perfect, so knows that there's always something he can work on.

During the winter months he has looked at his statistics - in driving, greens in regulation and putting - and spotted that he's nowhere near where he needs to be to match the consistency of players better than his 26th position in the world rankings.

So he went to work...on every part of the game that needed attention. It's a work in progress but today showed early signs that his goal to climb back up the rankings is on course...with a little bit of luck.

He turned in a opening round of seven under par 65 at Abu Dhabi - with no bogeys - a fact that cracked a big smile on the Irishman's face. It's one behind first round leader Charl Schwartzel of South Africa but it's only day one of the rest of the season.

His luck came at the par-5 8th where he chipped in for eagle - "it was a shock it went in at that pace"said Harrington - but the result of his hard work came with a series of putts using his new pre-shot routine.

"The first putt of the day I was away with the fairies, but I made the most out of the round - another day that would have been 69," added Harrington. "One thing showed up in the States last year. I was about 156th in every putting category, so something needed to be done."

The outcome is a new routine, where instead of taking two practice swishes inside the proposed path of the ball then sliding the putter behind the ball (without moving his feet), he sets up and makes three practice passes over the top of the ball to feel the pace before setting it down and making his stroke.

Fellow Irishman Graeme McDowell also hit the ground running with a sensational run of five closing birdies for a six under 66 to share third alongside the Swedish duo, Alexander Noren and Niclas Fasth.

On Sunday, he plans to take several weeks off to re-charge his batteries.

The US Open champion had a minor scare when his gap wedge touched his ball when setting up his approach to the final green.

"I was fairly sure the ball hadn't done anything and after (referee) Andy McFee had a look at the TV footage he was happy the ball had only oscillated. So I was happy there was no infringement, " commented McDowell.