How you can raise funds for Muscular Dustrophy sufferers 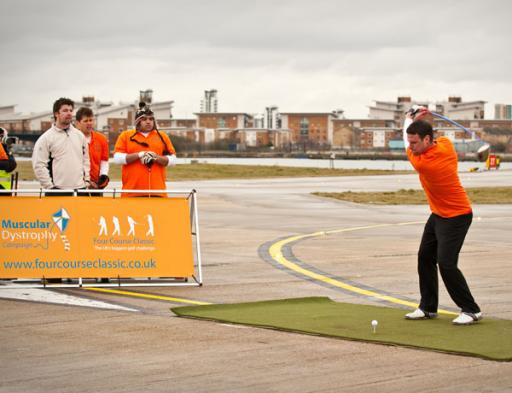 Some of golf’s biggest hitters swapped fairway for the runway in an attempt to record the world’s longest tee shot.  The challenge launched the Muscular Dystrophy Campaign’s 'Four Course Classic' to raise money for equipment to provide specialist help for young sufferers of this debilitating condition.

Five members of the Long Drivers of Europe Tour took to the tarmac at London City airport - each aiming to beat the existing 884-yard record set by Paul ‘St George’ Slater four years ago.

However, a strong cross-wind meant that no world record was possible. Slater again came closest to his record with a 598-yard effort, despite playing with a broken hand. The arctic conditions meant that the cold air restricted the flight of the Pennacle Golf golf balls, though Steven Kinder's 594-yard effort was a creditable runner-up.

Following the launch, the charity is calling for golfers across the UK to sign up to play four local courses in 16 frantic hours during the summer or specifically on one of the longest days (June 18, 2010) and to help to raise over £250,000 for the fight against the muscle-wasting disease, which effects thousands of children and prevents them reaching adulthood.

Said Slater: "I'm really pleased to have won this challenge today but disappointed I didn't manage to get closer to my record. The conditions were pretty tough with the cold and the wind making the attempt difficult. ? ?"I want to encourage every golfer to take on their ultimate golfing challenge by signing up for the Muscular Dystrophy Campaign's Four Course Classic. Playing four courses in one day will be a great challenge but it will also and raise vital sponsorship money."

Richard Gooding OBE, chief executive London City airport, which serves of 30 destinations across the UK and Europe and provides an ideal starting point for golfers looking to play top courses here and on the continent, commented: “We are delighted to participate in the launch of the Four Course Classic Golf Challenge and to support the Muscular Dystrophy Charity Campaign.”

For further information and to participate in the Challenge visit www.fourcourseclassic.co.uk

FOOTNOTE: More than 70,000 babies, children and adults in the UK have muscular dystrophy or a related condition. A further 350,000 people are affected indirectly as family, friends or carers. Muscle diseases cause muscles - not only in arms and legs but in the heart- to waste and weaken making it hard for those affected to do even the simplest of tasks. Money raised will fund vital, specialist equipment for babies and children aged 19 years and under.