New footbridge for the Ryder Cup 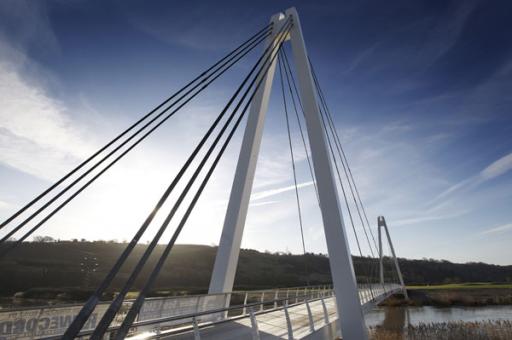 No expense has been spared by the hosts of the 2010 Ryder Cup in Wales to allow spectators the best possible golf experience when they visit the event from September 27 to October 3. A vast new twin-suspension bridge has been built at a cost of £2million and will transport players and spectators to the practice ground.

First Minister of Wales, Carwyn Jones cut the ribbon on the 120-metre long, cable stayed bridge over the River Usk in the company of Sir Terry Matthews, chairman of The Celtic Manor Resort, and Richard Hills, Europe’s Ryder Cup director.

The bridge completes a £16m investment by The Celtic Manor in building a new TwentyTen course, clubhouse and surrounding infrastructure, developments that were promised when one of sport’s biggest events was awarded to Wales back in 2001.

Primarily a footbridge, the structure will also be able to carry golf buggies as well as emergency vehicles, should the need arise. when The Ryder Cup is staged at Celtic Manor between 27th September and 3rd October, 2010. It was built by Welsh contractors, Port Talbot-based Andrew Scott Ltd., bringing further benefits to the economy of Wales.  Rowecord Engineering of Newport provided the superstructure and all the steelwork.

Sir Terry Matthews, Chairman of The Celtic Manor Resort, said: “This bridge to the new practice ground is an important part of our commitment to provide the best possible playing conditions for the top golfers from Europe and America who will be gracing the event, as well as enhance the spectator experience at The 38th Ryder Cup.”

Carwyn Jones, added: “The Ryder Cup is a huge event for Wales and I congratulate Sir Terry Matthews and the team on completing the final piece of the infrastructure required on-site to host such a high-profile event, which will be a superb showcase for Wales.”

The bridge was designed with close attention to the environmental and ecological sensitivities of the tidal River Usk. A six-metre exclusion zone on either side of the river bank protects otter holts and ensures the migrating patterns of salmon and shad fish are not affected.

The bridge will also link a huge TV compound and a vast tented village of spectator attractions with the first tee.

The bridge completes a £16m investment by The Celtic Manor in building a new TwentyTen course, clubhouse and surrounding infrastructure

OUTRAGE: Golfer DQ'D as putter grips were QUARTER OF AN INCH too close together
WATCH: Round of golf is interrupted by a WEDDING ceremony!
Bob Warters
bridge
Ryder Cup
The Celtic Manor
Previous
Shockwave out to make an impact
Next
Wilson Staff reveals D-FY iron/hybrid set