American from Challenge Tour eclipses the cream of Europe 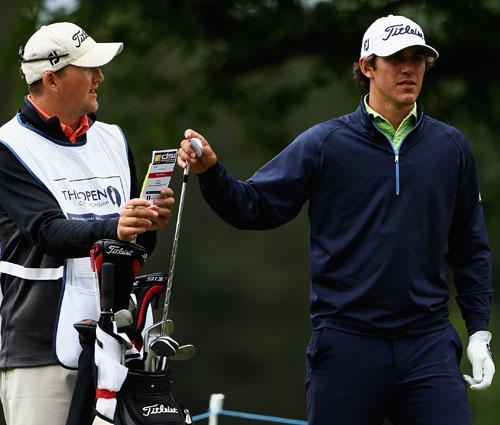 AFTER securing his European Tour card by winning his third Challenge Tour event of the year at the Scottish Hydro Challenge at the weekend, American Brooks Koepka took a 6.30 am flight from Scotland to claim his place at next month's Open Championship by winning the 36-hole European qualifier at Sunningdale.

Maintaining  his excellent form and showing no sign of fatigue over the Old and New courses at the Berkshire venue, the 23-year-old Florida golfer led the nine qualifiers after rounds of 69 and 65 which left him with a 5-under-par total.

Argentinian Estanislao Goya claimed the final spot after a four-man play-off with Ross Fisher, David Drysdale, and Alejandro Canizares. The Englishman and the Scot were eliminated after taking bogey fives on the first hole of the New Course, while on the 171-yard par-3 second, Canizares failed to get up and down from the back of the green, leaving Goya a grateful recipient of the final place.

Said Koepka: “It was a long day. I was in a lot of heather and I didn’t hit it that great but just tried to relax and hang in there. I putted really well and made some key putts on the second 18.

Among the unlucky ones was Thomas Levet, who lost in a play-off for The Open at Muirfield in 2002 after finishing tied with Ernie Els. He ended his day on one-over-par. Others who missed out included first round leader Tom Lewis, who stumbled to a 6-over-par 75 in his second round and Ryder Cup captains Paul McGinley and Jose Maria Olazabal.

The MOST POPULAR adidas Golf shoes as seen on the PGA Tour!
Nike have the BEST golf caps as worn by stars on the PGA Tour!
Golfmagic Staff
brooks koepka
Challenge Tour
The Open
qualification
Previous
Next
Bullard just fails in Open dream