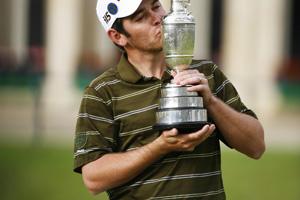 New Open champion Louis Oosthuizen admitted his stunning victory at St Andrews could take a while to sink in.

The South African stormed his way to 15th in the world with an exceptional 16-under par, seven strokes ahead of serial Major runner-up Lee Westwood.

“It was unbelievable,” said the newly crowned Champion Golfer of the Year.

“After the 12th it became a bit difficult, having such a big lead, to stay calm and focused, but I’m glad I had an eight-shot lead on the 17th tee!

“I kept cool and calm the whole way but it's probably going to hit me tomorrow or next week what I’ve done.”

Oosthuizen had previously only made one cut in a Major – carding closing rounds of 81 and 77 to finish dead last in the 2008 USPGA Championship.

And after shooting rounds of 65, 67, 69 and 71 to finish top of the pile on Nelson Mandela’s birthday, the 27-year-old revealed a conversation with fellow South African Gary Player inspired him to the win.

“We had a chat in my home language Afrikaans,” said Oosthuizen.

“He said to stay calm, have a lot of fun and that the crowd was going to be on Paul’s side.”

“Then he told me the story of when he played against Arnold Palmer when he won his first Masters.

“He said they wanted to throw stuff at me, but he was so focused on beating him in Augusta.

“It meant a lot him phoning me up. He’s just a great guy.”