Oosthuizen: all you needed to know 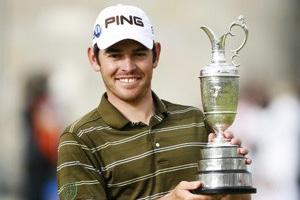 I think we’d all be lying if we said we knew anything about Louis Oosthuizen before the 139th Open Championship at St Andrews.

And although we may not be able to pronounce it correctly, it will be difficult to forget the name of the newly-crowned Champion Golfer of the Year.

But who is he? Keep reading for everything you didn’t need and/or want to know about the South African.

In the bag: PING

Upon turning pro at 19, Oosthuizen joined the Sunshine Tour in southern Africa and went on to win five tournaments: the Vodacom Origins of Golf Tour (2004), the Dimension Data Pro-Am and Platinum Classic (both 2007) and back-to-back Telkom PGA Championships (2007 and 2008).

He joined the European Tour in 2004, but had to wait six years for his first victory when he won the Andalucia Open in Spain with a record aggregate score of 263, beating Englishman Richard Finch and Scot Peter Whiteford to the €1million prize.

And just like London buses, another victory followed shortly as he cruised to the Claret Jug at St Andrews.

Before the Open, Oosthuizen was 54th in the world rankings, but his victory propelled him to 15th. He is currently fifth in the Race to Dubai.

Oosthuizen still lives in Mossel Bay, where he runs a Junior Golf Academy, with wife Nel-Mare and daughter Jana.

Oosthuizen’s best ever round was a 15-under par 57 at Mossel Bay Golf Club. You can see the scorecard on his official website.