Meet David Edwards and his bag of tricks!

Look out for new series with trick shot maestro 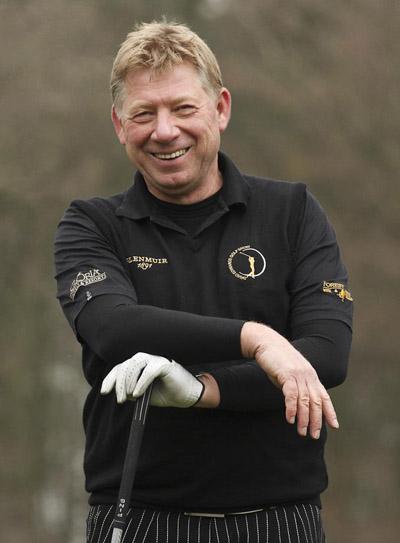 One of my earliest memories of playing golf was as a teenager in the early 1960s sneaking on to the coastal holes of Scarborough South Cliff golf course  - away from the prying eyes of the clubhouse and pro shop on the other side of the Filey Road.

Fifty years later I discover from my interview with golf trick-shot legend David Edwards that it was at this same club that as the professional, he first discovered his extraordinary skills and developed an act that is among the most sought-after in the world.

Thankfully he wasn't at the club when I was avoiding paying a holiday green fee but it's probably no coincidence that the Yorkshire town's reputation as the seaside entertainment mecca of the north-east rubbed off on this former European Tour pro, who discovered playing golf for laughs held better prospects than playing it for pars, birdies and eagles.

"I was always a good striker of the golf ball but the short game was never my strength so, although I qualified fourth at Tour School, I was never able to make a go of it as a tournament golfer," Edwards recalls.

"And perhaps if I'm honest, I didn't work hard enough to improve my level."

Having started his career selling equipment from a tressle table at Richmond Golf Club, then moving on as an assistant pro at Catterick Garrison in 1980, he chanced his arm on Tour as a contemporary of Anders Forsbrand and Paul Way and qualified for the 1981 Open at Royal St Georges

"But as a club pro the most important thing is to look after your members so I continued my teaching and building up the retail side of the golf shop."

When he dropped his Tour aspirations, he moved to Scarborough in 1986, and while developing his trick shot talents, a pupil in a local language school invited him to do some coaching at Episcopi Golf Club in Cyprus.

"I showed the members how I could hit balls from sticks in the tops of lager bottles and using it as a winter base built up a routine I could maybe take my show to different clubs," Edwards told me.

After moving to Bridlington Links he based himself at Forest Pines Hotel and Country Club near Scunthorpe in the early 1990s and tailored his golf show to corporate business.

"As well as my trick shot show I also video the golfers taking part in their round, add commentary in the style of Peter Alliss and Alex Hay, then replay it as after-dinner entertainment," reveals Edwards who is now much in demand around the world and sponsored by Ping, Farmfoods and Gloria Resorts.

Already this year he has been in Dubai, Holland and Malaysia and last week was performing at the Volvo China Open.

"But the pinnacle was to be invited to perform in front of 2,000 at the Ryder Cup last year at The Celtic Manor, " he says. "I had Jeff Overton, Luke Donald and Bubba Watson hitting balls off high tees, while Ian Poulter, Corey Pavin and Miguel Angel Jimenez interrupted their practice to watch the impersonations I did of them."

Over the next few weeks David Edwards is offering Golfmagic visitors some tips on how you can improve your game by attempting some of the tricks of his trade.

WATCH: Incredible golfer plays GOLF JENGA by skipping shot across lake
Rules of golf: Did you know this rule about clubs being damaged in your bag?
Bob Warters
david edwards
trick shot
Previous
Masters Golf's Tiger Shark putters
Next
Matteo: once a boy, now a man