Fresh start for the South African 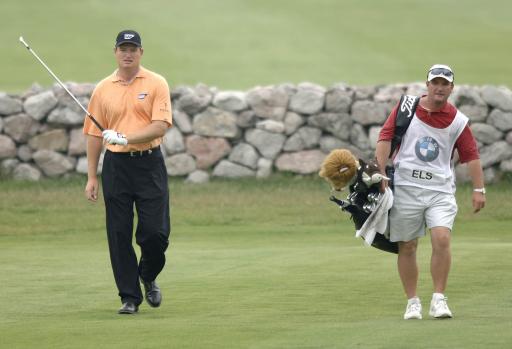 New year, new you. That’s what they say, isn’t it?

Ernie Els will be playing alongside a new caddie in a bid to bring a fresh approach to his game in 2011, ending his career-long relationship with Ricci Roberts.

The 41-year-old will have Mike Kerr on his bag as the new season tees off at the Tournament of Champions in Hawaii this week.

“We made the decision at the end of last year,” Els told Reuters at the Kapalua Resort. “Mike’s a nice quiet guy and I like to have a guy like that.

“I just wanted to make a change and have a guy who is a little different from what I have had before. He’s a low-key, relaxed kid. And he’s a good caddie.”

The South African has had good friend Roberts alongside him for most of his professional career, and last year the duty was shared with former ice hockey star Dan Quinn.

“I spoke to Ricci and also with Dan,” added Els. “Dan was just a one-year thing and he did a great job for me and we’re still friends.

“Me and Ricci, we are like brothers. He’s going to get involved with my business a little bit so he’s fine.”

Zimbabwean-born Kerr grew up in South Africa and spent a few years caddying on the Sunshine Tour before moving the European Tour, where he worked with the likes of Miguel Angel Jimenez and Trevor Immelman.

“I feel for Mike because he was going to take [Oosthuizen’s] bag but then Louis won the Open last year,” said Els.

“And then Mike had [Immelman’s] bag and now I am a bad guy there too because I took him away from Trevor!

“Mike caddied for Trevor for four or five events, so I called Trevor about it too. I just felt we can have a good relationship. I’ve been around this game for 20 years now, I want to get better and I feel Mike’s got a lot to offer.”