Legend was there for the kids 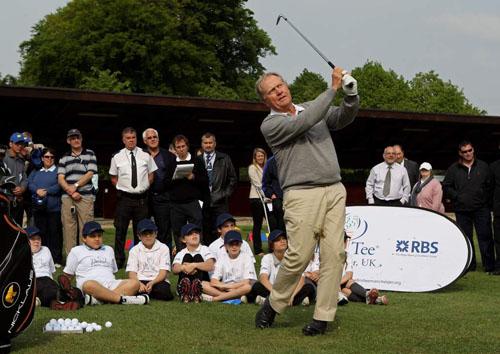 Turn up to a golf range and you don't expect an 18 time major legend to be hitting balls alongside you.

He was there to provide some valuable coaching for 20 youngsters from The First Tee of Manchester.

Nicklaus, RBS Ambassador and Honorary Chairman of The First Tee, met with the children to offer instruction and answer questions on the the importance of life lessons, sportsmanship, and the honourable traditions of the game.

He also signed autographs for the youngsters from local schools (King David and Temple) and explained how they can contribute to others in the community and help serve as mentors to help other young people who would not otherwise have the opportunity.

Dawn Roberts, executive director of The First Tee, commented: “It was an honour to welcome Jack. we reach over 1,000 young people in this area and it's events like this  that help us to raise the profile and funds to reach even more kids.”

Nicklaus has been a long-standing supporter of The First Tee since its inception in the US, is helping to establish the programme in the UK, following the launch of the Manchester chapter in June last year.