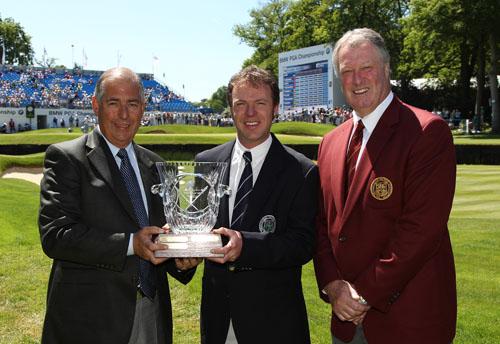 Daredevil PGA professional Jonathan Lawrence, from Farringdon Golf and Country  Club near Bristol has been recognised by his peers for raising thousands of pounds for a local charity with herculean tests.

The 31-year-old received the 2010 Toby Sunderland award at Wentworth and £1000 to be donated to a charity of his choice for his efforts in boosting the funds of the South West Children's Hospice.

Throughout 2009, Lawrence was unflinching in his support for his club's captain's charity over a number of arduous months which saw him undergo a 15,000 foot parachute jump, cycle 880 miles from John O’Groats to Land’s End in seven days, run the Bristol Half Marathon with club vice-captain Alistair Shanks before running the Snowdonia Marathon – rated one of the top five hardest marathons in Europe.

“I put in a lot of sacrifice in terms of work and when I could teach and my personal life, because all my spare time I seemed to be training. For the bike ride and the marathon there were times when the training all became a bit too much and I did contemplate quitting.

“But what continued to push me was the charity because what I was going through was nothing compared to those parents and children who use the hospice.

“What they do in terms of the support they give and the service they provide to the families and children is incredible. That always got me through the times when it was really tough. But it was brilliant year and the experience of riding from John O’Groats to Land’s End and seeing the extent of people’s generosity is something that will stick with me because it was just fantastic.”

Warren Sunderland of Sunderland Golf commented: “They were all worthy nominees for the award but no-one has made more effort than Jonathan. He has displayed a quite extraordinary determination to push himself the extra mile – literally in the case of his marathon efforts. We were all in awe.”

Stephen McAllister (Playsport Golf) for his involvement with the Teddy Bear Foundation and in particular an annual pro-am raising in the region of £50,000 per year.

John Watson (Total Golf Analysis) for raising in excess of £23,000 for The Wayahead charity whose focus is acquired brain injury; Childflight, which provides holidays for sick children, and Wish Upon A Star.

Craig Laurence (Stock Brook Manor) in recognition of continued charitable events which have raised in excess of £100,000 over 15 years for the likes of Cancer UK, Brainwave, The Make A Wish Foundation, English Blind Golf and Essex Air Ambulance.

Robert Macey (Ramsdale Park) in recognition of raising £16,000 in aid of Rainbow Children’s Hospice and the Nottinghamshire & Lincolnshire Air Ambulance by playing four courses in one day – using a helicopter as transportation.

Bobby Browne (Laytown & Bettystown) for his volunteer work in encouraging schoolchildren to take up the game via a free lesson, plus his role as treasurer of the Teddy Bears Golf Classic.

WATCH: Golfer hits AMAZING trick shot off large wall into the hole
Golf rules: Are you allowed to line yourself up with your golf club?
Bob Warters
charity
jonathan Lawrence
PGA
Previous
Now the 'game improvement' glove!
Next
Larrazabal tip No.3: Over-ambitious irons