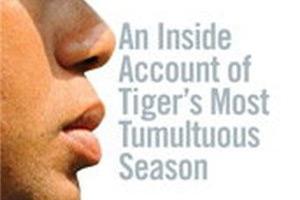 un-playable adj: Not playable as a) being in a position where a stroke is impossible or b) the code word used by those close to Tiger Woods to alert one another when he is in a foul mood and unapproachable.

IT WAS A year ago this week that Tiger Woods won the Jack Nicklaus-hosted Memorial at Muirfield Village - one of six tournaments he claimed in 2009, none of which added to his pursuit of the Golden Bear's 18 majors.

It received only glancing publicity in the UK and Europe but behind the scenes was one of the staging posts in the unravelling of Tiger Woods' life in the glare of the publicity surrounding his extra marital affairs.

It was one of the places where fleetingly his dark moods surfaced, which on reflection maybe harboured the secrets which were to surface later in the year.

At the post-tournament press conference, author Robert Lusetich recalls, Woods was sharing the podium with Nicklaus when a man stood up, reaching into his pocket and said "Jack's going to hate me for doing this... "

"The retired FBI agent who was handling security immediately jumped up from his position against the wall followed by three plain clothes police officers, assigned to shadow Woods. I knew they were armed and saw guns strapped to their lower legs.

"One instinctively reached for his weapon; it was, to say the least, a tense moment as the man could have pulled anything from his pocket as only a few feet away were the two greatest figures in the history of golf.

"But the man pulled out a grounds pass and wanted Woods and Nicklaus to sign it for him. The security people wanted to go after him but Nicklaus wanting to avoid a scene called them off. He told the man that seeing as he had gone to all this trouble, the least we could do is give you an autograph.'"

"Woods, it was clear, did not share Jack's goodwill, although he signed the ticket for the man who was soon escorted away.

"I've always wondered whether he signed his own name, " recalls Lusetich.

"Years ago his staff would throw away all the hate mail and death threats Woods received but Woods wanted to read it, sometimes he would pin the bigotry on his wall to remind himself why he needed to be forever vigilant. Strange dark places, indeed from whence motivation comes."

In his definitive chronicle of the most stunning year in the legendary career of Tiger Woods, Australian Lusetich, the only journalist to cover every event the world No.1 played, unveils much more about the real Tiger Woods.

He answers the questions: "Is Woods the unbeatable, indomitable, and ultimate competitor? The husband and father who cares more about his family than anything else? Or is he the supremely confident controller who thought fierce management of his image and those around him would allow him to lead a double life?

In "Unplayable," Lusetich takes an in-depth look at the world's most recognizable yet least known athlete and tells of the unfolding of Tiger's most pivotal season on the golf course and unveils who the most elusive man in sport really is, peeling away the layers of the Woods persona to create a portrait that is neither unsympathetic nor hesitant to shed light on Woods' shortcomings.

As well as his caddie Steve Williams, his coaches and fellow players, Lusetich speaks to Woods' former and current friends, celebrity athletes, sports agents and sponsors to discover the 'real' Tiger Woods and how his reputation imploded at the end of 2009.

Unplayable is a gripping read, portraying the player who changed golf and inspired more fans around the world than anyone else in the history of the sport yet ultimately, as one critic claimed 'was a spoilt man who felt entitled to become petulant when he didn't get what he wanted.'

*Unplayable - an inside account of Tiger's most tumultuous season' is published by Simon and Schuster in hardback, priced at £17.99.