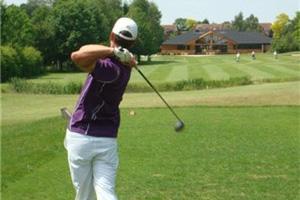 On September 20, 2010, David West played his first ever round of golf.

Recently redundant, David had decided he was bored of having to skip corporate golfing days for not knowing a sand wedge from a sandwich. He went to Mount Pleasant Golf Club in search for a teacher. There, he met James Hull.

A week later, David had decided golf was more interesting than work and came up with a challenge; a challenge which would take over and change his life forever.

Novice2Scratch was born. David would spend a year playing golf under James’s tutelage and at the end of it he would undertake a “Challenge Week”, where he would play three rounds of golf and attempt to shoot an average of level par.

While the scoring didn’t quite go according to plan, David still describes it as “the best year of my life”.

I sat down with him to find out more...

David, I had the pleasure of playing with you in the first round of your Challenge Week. An 89 wasn’t the best way to start…
19-over par, that’s awful. Though in the context of only having played golf for one year and the ridiculous amount of pressure I put myself under for this round it’s not awful. But it is disappointing.

I asked you before we teed off and you admitted you were nervous…
I was. I had visions of crumbling straight away – an air shot? A horrible top along the ground? It wasn’t to be, I made par and whispered a thank you to the golfing gods.

I was under no illusion going into Challenge Week. My best round was 76, so I knew I had little chance of carding an average of level par. But I knew I had the ability to shoot three rounds in single figures.

At the second hole of that first round, I carded a nine after some tree trouble and over the next few holes I was playing without confidence and it was showing badly.

When I look back I can see that throughout the round I was putting in hope rather than expectation. I was trying to putt close to avoid three putts rather than sink the first one. As putting is the strength of my game this is, to me, the biggest indicator of my lack of confidence on the day.

Things didn’t get much better for the second round. In fact, they didn’t get any better at all as you shot another 89.
38-over par after 36 holes. I think it was safe to say it wasn’t going to happen at that point!

But a final-round 86 showed some improvement.
I went into the final-round determined to just enjoy myself. And I did just that, before allowing myself to enjoy a few beers and a well-earned weekend off!

So where did it all go wrong?
Well, I missed too many greens and didn’t card enough pars. But the more I mulled on this, the more determined I became that the answer is that it hasn’t gone wrong.

Why do you say that?
I have had the most incredible year; meeting people and playing fantastic golf courses. I have also learned a lot about myself and how I cope in challenging situations - things that I can use in everyday life.

And it wasn’t just about the scores, was it?
No, I love learning and now I want to give the benefit of what I learned this year to others. I have learned that it is possible to coach a scratch standard technique to a forty-something complete novice within one year and I have learned that the thing that stops a golfer making the most of their technique is what goes on in their head.

Having tried it, do you think it is possible for someone to go from complete novice to shooting level par within a year?
Absolutely. I think it is a target that is achievable – providing the novice in question has a certain level of natural sporting ability and can deal with the pressure.

And is the right side of 40…
That’s one place where I struggled!

Interview continues with David getting a little more philosophical. Read on...