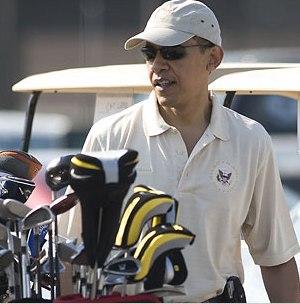 There are few more frustrating experiences in life than turning up at a holiday resort and, for whatever reason, not being able to hit the fairways.

And that is exactly how golf-crazed American president Barack Obama is feeling right now; the 51-year-old currently being starved of the game he loves at the 54-hole Kingsmill Resort in Williamsburg.

According to Helene Cooper of the New York Times, the president left his sticks in the White House garage over the weekend in a bid to focus his preparation for tonight’s second presidential debate.

A fair enough excuse, you might think, for the man who has been criticised by Senate Minority Leader Mitch McConnell for playing too much golf during his time in office.

But if I was American and saw him teeing up with set of rental clubs - just as our very own Bob Warters managed on a recent cruise with his better half - I know where my vote would be going.