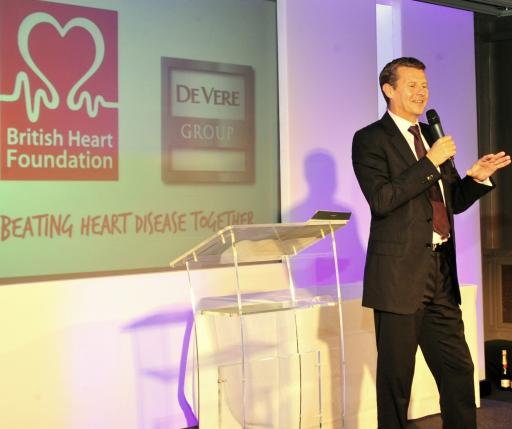 The golf day was held in support of the ‘Charity of the Year’ partnership between the BHF and The De Vere Group, which is aiming to raise £250,000 to support the nation’s heart charity.

“The money raised is a great contribution towards our group target of raising £250,000,” said De Vere Oulton Hall’s director of golf Keith Pickard.

“This is a fantastic cause and one that the De Vere Group is wholeheartedly committed to supporting in the next couple of years.

“We have an active membership at Oulton Hall and I must say a big thank you to everyone that entered a team and sponsored the event, as well as those that donated and bid on auction prizes.”

Tee sponsorships and a Gala Dinner also contributed to the £7,985 raised on the day, which is equivalent to the cost of six portable defibrillators, plus CPR training equipment such as mannequins, teaching guides and lesson plans that could help save lives in local communities across theUK.

Alan suffered a cardiac arrest in February this year as he played golf at his local course. Luckily, his friends remembered seeing the BHF’s Hands-only CPR television advert and helped to keep Alan alive with chest compressions until the emergency services arrived.

“The golf day was a huge success and we are proud of the support from The De Vere Group and each of the properties across theUK,” said BHF’s chief executive Peter Hollins.

“Stories like Alan’s show the importance of CPR training and the correct equipment being available in the community. The money raised at Oulton Hall will go towards the BHF’s life-saving work.”