Rory in the mood to please the home fans - and there will be a lot of them... 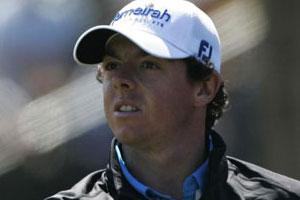 Seven years ago Rory McIlroy shattered the existing course record at Royal Portrush in the North of Ireland Open as a fresh-faced 16-year-old.

While most people think his score will stand the test of time, the Ulsterman wasn’t so sure after completing 18 holes at the County Antrim course on Tuesday.

McIlroy tweeted: “Good practice round this morning, played 18 and Royal Portrush is in great nick. Think my course record might be in jeopardy though!”

Despite missing four of his last five cuts, the World No.2 knows he could not ask for a better place to kick-start his topsy-turvy season as the Irish Open tees up in Northern Ireland for the first time since 1953.

“I’ve played in numerous Irish Opens before but never as a professional in front of my home fans,” McIlroy told BBC NI.

“Shooting 61 at Portrush in 2005 was pretty cool back then and I’m looking forward to getting back out there and shooting a couple more low scores again.

“I have great memories here. It will be a busy week but one I am looking forward to. If you miss a putt out here, the fans seem more disappointed than you are!”

With all four Irish major champions - McIlroy, Graeme McDowell, Darren Clarke and Padraig Harrington - in the star-studded line-up, it’s little wonder this is the first event in European Tour history where tickets for Friday, Saturday and Sunday have sold out.

Spectators without tickets can still pay on the gate to watch Wednesday’s Pro-Am featuring stars from the worlds of showbiz and sport and the first round play on Thursday, but after that, to gain entry to the action on the world-famous Dunluce Course fans must be in possession of a valid ticket.

“When we announced in January that the Irish Open was coming to Royal Portrush we were told to expect a hugely positive reaction from golfing public but this has exceeded all our expectations and is fantastic news for the tournament,” said Irish Open’s director Antonia Beggs.

And a number of Americans have made a welcoming journey across the pond, including US PGA champion Keegan Bradley, John Daly and Rich Beem.

Englishman Simon Dyson, who defeated Richard Green by a shot at Killarney last year, will bid to become the first player to defend the title since Colin Montgomerie in 1997.

When?
Thursday June 28 to Sunday July 1

Did you know?
The 2013 tournament is scheduled for County Kildare at Carton House which hosted the event in 2005 and 2006