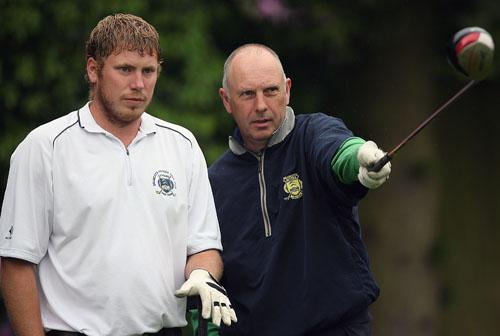 You've played your shot and you find your ball embedded in the face of a rivetted bunker - just like the ones you'd find at any links course, St Andrews for example.

You can't get at it but what's the ruling?

Do you try to hack it out and play on? Do you take a penalty drop in the bunker? Or drop it out under a penalty keeping the point where it was embedded between you and the flag?

Neither of the above - you take a free drop at the nearest point of relief.

And who says so? Midland PGA Professional Nic Gilks says so and he should know because next week he's at Atlanta Athletic Club as one of the referees in the US PGA Championship next week.

Gilks, who owns the Bramcote Waters Golf Course, in Nuneaton is excited at the prospect officiating at the USPGA Championship at Atlanta Athletic Club in Georgia next week.

He recalls the first ruling in a pro event was in a PGA Europro tournament at Prince's with former Ryder Cup player Paul Way.

“His ball had embedded in a riveted bunker and he couldn’t play it. Fortunately I had just done a similar ruling with the senior referee on another hole. Paul didn’t know what to do but in fact it was a free drop at the nearest point of relief which was actually on top of the bunker so the rules worked very much in his favour.”

Now fully experience on the European Tour, Gilks, flies out to America on Monday with PGA tournament director and senior referee Ben Groutage and when the action gets underway, he will be inside the ropes with golf’s biggest stars including a rejuvenated Tiger Woods.

“I was a rules official the Wales Open earlier in the year but this will definitely be the pinnacle of my refereeing career to date,” he says. “There is a certain logic to the rules, they are pretty fair it’s just that people complicate them with the daft things they do on the course.”

He adds: “I’m sure I will have a few nerves on the opening day but at the moment I am just looking forward to it. When I first started refereeing in 2001 it used to be quite nerve-racking especially being called to my first ruling but not so much now."

Jim "Bones" Mackay given major memento that Phil Mickelson never gave him
Justin Thomas on BEST BOGEY of his life at US PGA: "I cold shanked it"
Bob Warters
gilks
referee
rules of golf
US PGA
Paul Way
Previous
Golfer makes hole-in-one on par-4
Next
Legends on show at Par-3 Championship