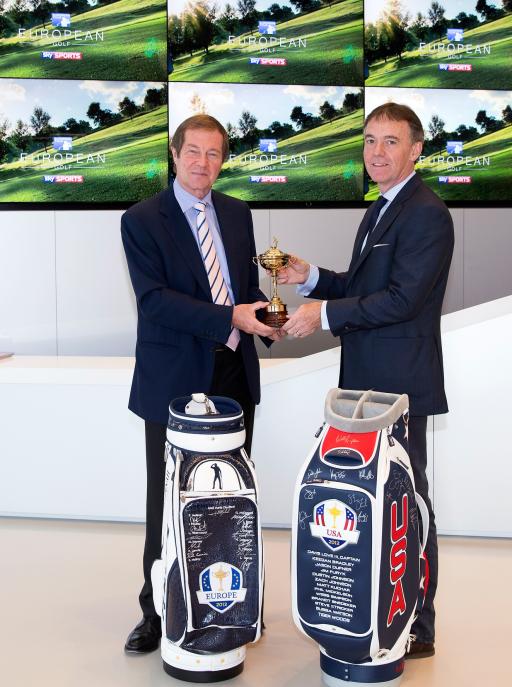 SKY SPORTS has been presented by the European Tour with a replica Ryder Cup trophy and two signed team golf bags from the 2012 European and USA teams as recognition that Gleneagles 2014 is the 10th Ryder Cup broadcast live on Sky Sports, as part of their 20 year partnership.

Sky’s first live Ryder Cup was held at Oak Hill Country Club in New York, where the European team, captained by Bernard Gallacher, won by a one point marginto win back the Cup.

Since then Sky has followed every historic moment, from Paul McGinley’s triumphant dive into the lake at The Belfry in 2002, to Darren Clarke’s emotional walk to the first tee in 2006.

The live broadcast has changed almost beyond recognition for viewers since 1995, as new technology has enhanced the viewer’s experience at home:

2002 - up to nine interactive options including 'Star Match,' 'Live Scoreboard,' and 'Off Course' option

2012 - live multi-platform coverage, through Sky Go, a new Ryder Cup companion player on the iPad and a dedicated microsite

The scale of the Sky Sports operation on the ground has increased to support the breadth of coverage now available:

Jeremy Darroch, Chief Executive, BSkyB, said: “We’re incredibly proud of our long-standing partnership with The European Tour. Our strong relationship has enabled us to deliver innovations over the last two decades that have kept The Ryder Cup at the forefront of sports broadcasting and have enhanced the viewing experience at home. It’s a globally prestigious event that never fails to grip the nation and inspire new fans to the game.

“For all of the technological advances in the world, some things never change and that’s the determination to win that is on show every two years as the teams go head to head for the much coveted Cup. The replica trophy will take pride of place at Sky where we’re all counting down the days until the excitement starts once again.”

George O’Grady, Chief Executive of The European Tour, said: “Television coverage of The Ryder Cup has become synonymous with Sky Sports since 1995, and this month’s match at Gleneagles will be the 10th contest to be broadcast exclusively live on Sky. No-one can forget the ‘Miracle at Medinah’ two years ago so, to coincide  with the launch of the magnificent new Sky ‘hub’ studios and the re-named Sky Sports News HQ channel, we are delighted to contribute a replica Ryder Cup and two superb items of signed memorabilia from that memorable contest.

“We have developed a robust and enduring relationship with Sky Sports, our leading broadcast partner for over 20 years and who, as a fledgling satellite broadcaster, first brought The Ryder Cup from Oak Hill with a new and innovative flair in 1995. It is a great pleasure to hand over to Jeremy  the two signed team golf bags and replica trophy which will be a feature in the state-of-the-art Sky hub and we look forward to Sky Sports bringing all the drama and excitement in glorious High Definition from Gleneagles – as well as the next two editions in Minnesota and Paris.”

For the first time, Sky Sports 4 will become ‘Sky Sports Ryder Cup’ and will show over 330 hours of golf across 14 days, including 36 hours of live coverage from Gleneagles.