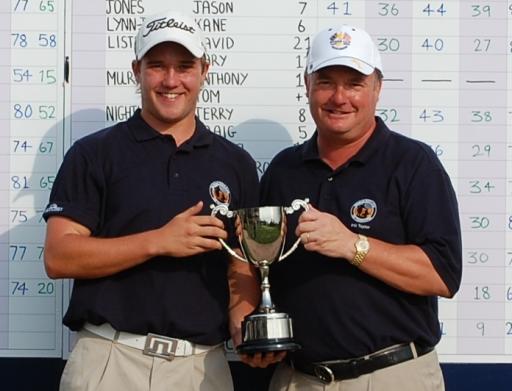 The Taylors recorded a blistering 81 stableford points (9-under) to finish four points clear of their nearest rivals Joe and Rymer Smith.

“What a superb feeling,” said emotional dad Phil, as he collected the winner’s trophy with his son along with a voucher for complimentary entry into the European Father & Son Golf Championship this October.

“As a PGA Professional it is rare to get the opportunity to play in a tournament with my son so this really is special.

“This is a fantastic event as it encourages fathers and sons from all walks of life to take part.

“It doesn’t matter whether you are an amateur or a professional, a scratch golfer or a 20 handicapper, anyone can take part and have fun.”

“We had a lot of fun out there!” added Ben. “The course was in excellent condition and the greens were true and fast. I had six birdies yesterday, but Dad came into it when it mattered today and held it together for the team.”

The Jones team, off seven and six respectively, carded 85 points for a three-point victory ahead of John and Paul O’Dea.

“It’s a total shock to win,” said Jason. “It’s been an emotional few days, we were just saying last night how much we’d love to go out to Spain to compete in the European Father and Son Championship in October but things have been tough at work for me so I couldn’t afford the trip – of course now as champions with our free place we’ll be able to make it the trip of a lifetime.”

Entry to the European Father and Son Golf Championship costs just €658 for juniors (under 18) and €769 for adults. The price includes five night’s accommodation on a half board basis (dinner, bed and breakfast) at the five-star El Rompido Golf Resort in Cartaya Huelva, Costa de la Luz, Spain; four rounds of golf, tournament entry and prizes. Entrants also benefit from free chauffeured coach transfers to and from Faro Airport, a welcome drink, banquet gala dinner, live entertainment and excellent prizes.