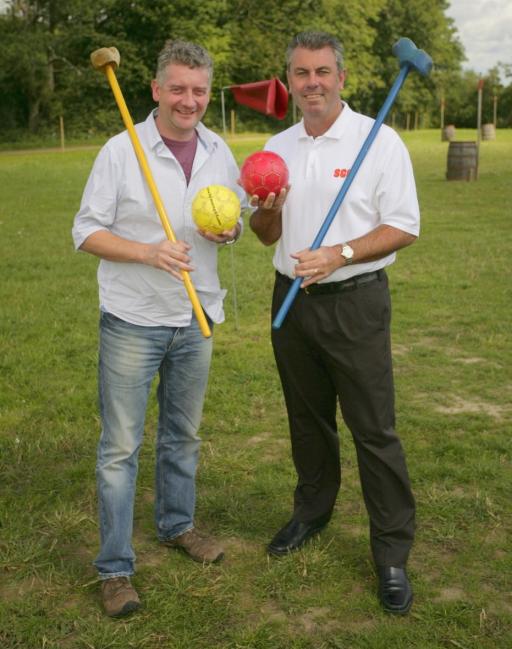 It’s played with a wooden clog as a club and large rubber balls and is a huge hit in The Netherlands. Now Farmers Golf has its first UK course near Crawley in West Sussex.

Stuart Beare, of Tulleys Farm in Turners Hill, saw Farmers Golf being played in Holland and was immediately struck by how popular it was with all ages and decided it would perfectly compliment his existing farm attractions.

He said: “It’s a bit like crazy golf but on an agricultural scale. Its fantastic fun to play and I hope this will be the first of many courses around the country.”

Farmers Golf, Boerengolf in Dutch, originated in 1999 by enterprising farmer Peter Weenink and there are currently 90 locations in Holland and more than 170 across the world including France, Germany, Belgium, Austria, Sweden, Poland, Finland, the US and Canada.

To launch the UK’s first course of what is believed to be Europe’s fastest growing outdoor activity, Mr Beare challenged local golf professional and MD of the Lindfield Golf Club and The Golf College, Paul Lyons, to a round.

“It’s quite different to the golf I’m used to playing,” joked Mr Lyons. “But it’s fantastic fun and I’m sure will appeal to families. I hope it encourages many people to take up golf.”

Farmers Golf at Tulleys Farm is priced at £3 per person or £10 for a family of four. Visit their website for more information.