US Ryder Cup captains: six of the best (& worst)

Davis Love takes the hot seat for the second time in 2016, but whose example should he follow? 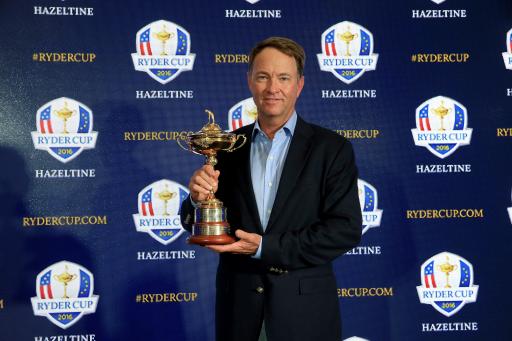 Davis Love returns to skipper the US at the 2016 Ryder Cup captain, to take on Darren Clarke's European side at Hazeltine.

It will be Love's second stint a skipper, after losing in 2012, and he would be foolish not to learn from those who have gone before him.

Captains have a lot to think about - pairings, order, motivation. Some have ticked all the boxes, others have failed spectacularly. So who has been the best - and worst - for the US since Europe joined the biennial bash?

Billy Casper had the unenviable task of being the first American captain to take on not just GB & I but the best players from Europe in 1979.

Europe welcomed Seve Ballesteros for the first time, but Casper managed to keep the swashbuckling Spaniard quiet at the Greenbrier, West Virginia.

Although Jack Nicklaus and Tom Watson were absent, Casper's team scored a resounding 17-11 victory. It extended the States winning streak to 11, a record that still stands.

Dave Marr's "Untouchables" had thrashed Europe on home soil two years before but this was expected to be a closer affair at PGA National in Florida.

The score was level at 8-8 going into the final day, and US captain Jack Nicklaus opted to send his best players out last, while European counterpart Tony Jacklin did the opposite.

Nicklaus's gamble paid off as Lanny Wadkins and Tom Watson helped retain the cup by a single point, the last time the USA have won two consecutive Ryder Cups at home.

Played to a backdrop of the Gulf War, Dave Stockton's men were pumped up and out to stop the rot of three straight defeats at Kiawah Island.

Bad blood between Stockton and European captain Bernard Gallacher and controversy at every turn added to the legend of the "War on the Shore".

After the second day's play the scores were locked at 8-8 but Stockton's lower order piled the pressure on the Europeans on Sunday and Bernhard Langer missed a six-foot putt to win the contest. "I stirred up a hornet’s nest, but I don’t care," said Stockton later.

Tom Watson helped restore some civility and guided his US team to a rare win away at the Belfry in 1993, a feat which has only been matched by Dave Marr's 1981 side in the European era.

Europe took a one point lead into the Sunday singles but Watson's middle order was dominant and helped the USA secure a 15-13 victory.

Watson's picks of Raymond Floyd and Lanny Wadkins, who had both played seven Ryder Cups, proved pivotal as they contributed vital points.

Ben Crenshaw's side were on the brink of failure at 10-6 ahead of Sunday's singles at Brookline, but the skipper issued a rallying call on Saturday night, telling reporters: "I'm a big believer in fate. I have a good feeling about this."

Further inspired by a speech from future US president George W Bush, Crenshaw's players won the first six matches to take the lead.

When Justin Leonard holed a 45-foot birdie putt on the 17th, the US team swamped the green, leaving Jose Maria Olazabal still to hole his 22-foot putt to stop an American victory. In a heated atmosphere, the Spaniard missed and Crenshaw's side had pulled off one of the great upsets.

Paul Azinger will be most people's pick as the best ever American captain after he masterminded the last US victory against Nick Faldo's Europeans at Valhalla in 2008.

Azinger employed a "pod system", breaking down the team into smaller unites to aid cohesion and team spirit. It worked a charm, with the Americans winning 16½-11½ to end a run of three straight defeats.

His methods are still revered, not least by Phil Mickelson in his post 2014 Ryder Cup rant, and Azinger wrote a book called "Cracking the Code".

Europe had broken their Ryder Cup duck in 1985 but Jack Nicklaus was captain for the second time two years later at a course he designed - Muirfield Village.

The US had never lost on home soil and with their skipper's inside knowledge they looked hard to beat. What could possibly go wrong?

But the Europeans suffocated the Americans and enjoyed a five-point lead going into the final day. The US team rallied but could not muster enough to stop a determined European team, who triumphed 15-13. This was the last time the Americans did not use captain's picks.

Tom Kite's team travelled to Spain to take on Seve Ballesteros on his home patch - the first time the competition was played on continental Europe.

Unfortunately for the guests, Kite made the task all the more difficult with a series of disastrous pairings.

Played under an atmosphere of conciliation after the "Battle of Brookline", the Americans were optimistic they could win again at the Belfry in 2002 with a team spearheaded by Tiger Woods and Phil Mickelson.

The sides were locked at 8-8 going into Sunday and US captain Curtis Strange opted to bottom-load his singles order, sending his two stars out last. Sam Torrance did the opposite, putting his strength out first.

The USA only won a single match from the top six outings, while Mickelson lost to Phillip Price and the match was over before Woods finished. Strange was lambasted, but said: "“Those who questioned my first three guys [Scott Hoch, David Toms, David Duval], insulted those players. These are world-class players."

By the 2004 Ryder Cup at Oakland Hills, Tiger Woods and Phil Mickelson were in full pomp, but famously not the best of friends.

Despite this, captain Hal Sutton paired his superstars together on the first day and they lost twice.

Sutton looked lost, and the American's went down 18½-9½ - their worst margin of defeat since the competition began in 1927. "I made mistakes," said Sutton. "I thought there was no bad way to pair the guys. The pairings that we sent out didn't create any charisma."

Harsh, perhaps, on Davis Love but his side did surrender in the face of one of the great fightbacks sport has seen at Medinah.

In a mirror image of Brookline, the USA had one hand on the trophy with a four-point lead going into the final day. But the Europeans, inspired by the late Seve Ballesteros and some sublime putting from Ian Poulter, sensed they still had a "pulse".

As the Europeans grew in confidence, Love was unable to rally his troops and the US won just three of the 12 singles matches as Europe clinched the "Miracle of Medinah" 14½–13½. "We are all kind of stunned, but I wouldn't have done anything different ," said Love.

Should he suffer another defeat in 2016, with a team brimming with talent on home soil, his stock as skipper would fall further still.

Tom Watson rarely disappoints in Scotland but at Gleneagles in 2014 he was unable to unify his team and the US team suffered a third successive loss.

Much was made of the fact Watson was the oldest captain ever at 65 and his methods were criticised in some quarters for being outdated. Phil Mickelson used his post-match tirade to suggest Watson had not involved the players in any decision making.

Watson later admitted it was a mistake not to play Jordan Spieth and Patrick Reed for Friday's afternoon foursomes, and he benched the star pairing of Keegan Bradley and Phil Mickelson for the whole of Saturday which was dominated by Europe.

Europe waltzed to a 16½-11½ victory and the fallout from the loss prompted the Americans to create a taskforce to address the losing streak.