And we discuss the format for Rio in four years time 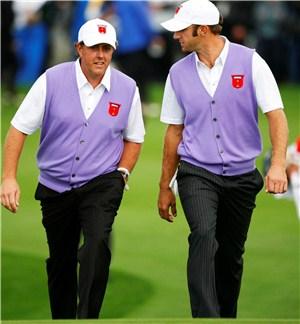 With London 2012 in full force and Great Britain going Wiggo mad, you can't help thinking it would have been special to see golf make its long-awaited return to these Games rather than four years down the line.

But had we been gracing the turf at one of our Olympic Gold courses, the field would have been full of anomalies.

Englishman Ian Poulter and American stars Phil Mickelson and Dustin Johnson would have missed out, while little-known World No.321 Mardan Mamat and World No.334 Espen Kofstad would have made the 60-man line-up.

The women's field would dig even deeper, pulling 446th-ranked Paola Moreno of Colombia into the reckoning.

Under the current criteria set by the International Olympic Committee, a 72-hole individual strokeplay event has been designated for the top-15 in the world - regardless of nationality - with a further 45 players selected according to the rankings, but with a maximum of two eligible players from each nation that do not already have two or more players among the top-15.

So current World No.29 Poulter would miss out since Great Britain already has five players inside the top-15 - pending Graeme McDowell and Rory McIlroy's decision to fly GB or Irish flag - Mamat would figure as Singapore's sole representative and Kofstad as Norway's.

The list goes on. Johnson, ranked 16, and Mickelson at 17 would miss out because the stars and stripes have eight players currently in the top-15.

The women’s Olympic tournament is scheduled to operate under the same system and would see a similar miscarriage of justice with Americans and Koreans in the top-30 excluded in an attempt to create the illusion of a level global playing field.

Every sport has qualifying quirks but golf has the chance to start fresh in the Olympics in four years time at Gil Hanse's brand new course at Reserva de Marapendi in Rio de Janeiro. It would be a shame to see some of the leading lights of world golf having to press the red button.

Following the traits of the WGC-Matchplay Championship is surely the best idea by taking the top-64 in the world rankings to provide the Olympics with a truly elite contest with, as things stand, 12 different nations represented.

When Canadian George Lyon won the last Olympic golf event back in St Louis, the format was matchplay. Why change?

Majors will forever be the be-all and end-all of professional golf, yet if the Olympics is to become a vehicle for spreading the sport beyond its traditional habitat, the winner-takes-all of matchplay offers a more accessible format for doing so.

If it means Tiger Woods and Luke Donald go home after one match, who cares? The essence of the Olympics is performing at your peak on one given day every four years and it will be up to Woods, Donald and the other 62 players to do just that.

While golf's return to the Olympics if of dubious enough validity, the least the golfing governing bodies can do now that the sport has been voted back into the Games for the first time since 1904 is to ensure our game is reflected in the best possible light come 2016.

If you were in charge of running golf at the Olympic Games in four years, how would you format it? Share your views in the forum, via @Golfmagic and on Facebook.