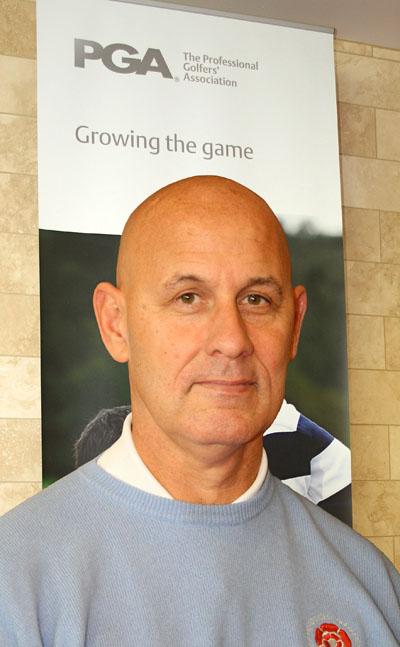 The ex-soldier from the Royal Artillery, who recalls firing golf balls at burnt out Russian Tanks during off-duty moments, says: “I feel very privileged to be in this position having just done all the training. My golf window is short; I can’t waste a day.”

Always recognised as ‘Sid,’ during his days in the army, Trench (left) is determined to make the most of his new career - which has included trudging through his local village delivering leaflets to residents, launching schemes in two Basingstoke colleges, enrolling in the National Skills Challenge, implementing the Golf Foundation’s Junior Passport scheme and organising golf days to the BMW PGA Championship.

He has also overseen his junior academy rise from a handful of youngsters to a thriving 80 regulard using the facilities.

But coaching youngsters and other with impairments is a far cry from Trench’s previous life barking orders to battle-toughened squaddies in Iraq, Bosnia and Kosovo, before retiring four years ago, determined to find a new career.

“You get some downtime in the Army and I remember hitting 7-irons with a few of the lads. I’ve never looked back.

“I would always pack a tube of balls and a couple of clubs and using a small piece of astro turf to hit balls in Basra at burnt out Russian tanks around dusk when it was cooler.

“Golf was a sport I knew I could do forever; it was a competitive environment and I wanted to achieve. I couldn’t just settle with being mediocre, I wanted to play to the best of my ability.”

The prospect of becoming a PGA professional only became a reality when he contemplated retirement.

“As a career soldier nearing 50 it was time to think about my family. I knew I wanted to be a PGA pro but there were a few raised eyebrows,” he admits. “I did a lot of research and decided if I am going to do it, I am going to do it properly.”

To prepare for his playing ability test he was coached by the legendary John Jacobs at Cumberwell Park.

“He spent a lot of time with me giving me extra technical and mental skills to be equipped to deal with the test and was instrumental in giving me the coaching outlook I wanted. His skills were so user-friendly.”

“I think he was thinking ‘is this guy for real?’. But he was a constant source of advice and helped remove some of the sharp edges.”

“You have to be able to take yourself down to the kids’ level, it has got to be fun and safe, and you have to communicate. If you can’t relate to a six-year-old, you take the edge off the experience,” he says “and for that the PGA training has been phenomenal.

“Every day is a golf day. I am living the dream.”