World No.1 is concerned at the pace of the greens following his practice round 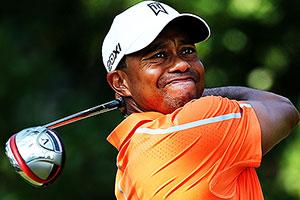 TIGER WOODS is concerned by the speed of the greens at Oak Hill Country Club, which hosts next week's PGA Championship.

The World No.1 played a practice round on Tuesday and he needed no prompting to air his views.

"The greens are spotty, and it'll be interesting to see what they do because they were running just under nine on the Stimp [Stimpmeter]," Woods said.

"They don't have much thatch to them, so it'll be interesting to see what they do for the tournament and how much they're able to speed them up with kind of a lack of grass."

At major championships, greens usually run at around 12-13 on the stimpmeter which means the greens at Oak Hill will be slow compared to what Woods is used to.

At the Open two weeks ago, Woods admitted he struggled as the greens slowed up throughout the weekend.

"There were so many positives, how well I hit it and how well I played," said Woods, who finished T6. "Looking back on it, as I was saying on Sunday night [at Muirfield] with you guys, the only difference is I just didn't get the feel of those greens the last few days, and I didn't make the adjustments.

Oak Hill suffered a severe storm in July causing a tree to fall on the eighth green as well as causing many others to be damaged.

"They just don't have a lot of grass on them," Woods said of the greens. "And I'm sure by Monday they'll get them up to speed. They're looking to get them at around 12 and 13 [on the Stimpmeter], but you don't want to do it for two weeks with how they are right now. Just save them for the week of the tournament."

Woods is currently in action at the WGC Bridgestone Invitational in Ohio and opened up with a 4-under round of 66 on Thursday.