Former England striker Peter Crouch had his playing partners in fits of laughter as he belted his drive down the middle. 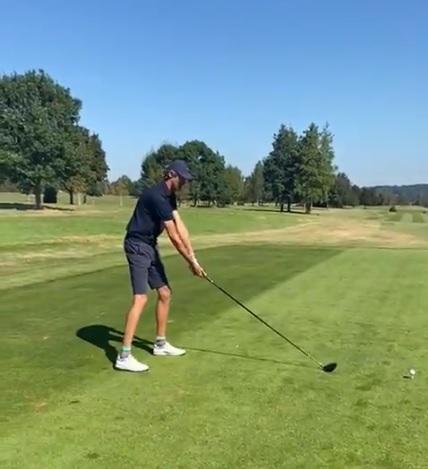 Former footballer Peter Crouch had his playing partners in stitches yesterday when he crushed a tee shot with a massive driver.

The 6ft 7in striker, who is a keen golfer, shared a video on his Twitter profile using a club with a shaft nearly as big as him.

He posted the video on a sun-stroked course and joked the club was a "a bit short for him".

After taking one long, gangly practice swing he smashes it down the middle of the fairway.

The camerman later replied on Instagram to one user who asked how far it went, saying at least 250 yards.

His playing partner shouts "damn dude" while Crouchy says he plans on keeping the massive driver in his bag for good.

He turns and faces the camera and gives his viewers a thumbs up.

Crouch, nicknamed Crouchy, is no stranger to the game.

Did we come up with this challenge just to see @petercrouch playing with a child’s club? Absolutely #PPGolf pic.twitter.com/imTk1NuYod

He prompted similar hilarity when he took part in Paddy Power's golf challenge at Centurion Club earlier in the summer.

Former England striker Crouch, 40, looked like he was holding a toothpick when using a child's club in one part of the challenge.

He drives balls through wood, off the knees and uses his putter as a driver.