Koepka discusses the origin of his feud with DeChambeau ahead of the Open Championship, and he explains what will likely happen at the Ryder Cup... 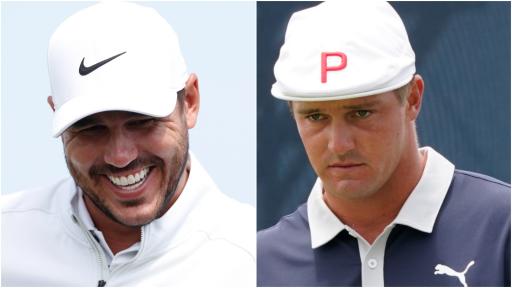 Brooks Koepka revealed the origin of his feud with Bryson DeChambeau back in 2019 during his pre-Open Championship press conference with the media at Royal St George's on Tuesday.

Koepka explained how their dislike for each other started more than two years ago when the four-time major champion sounded out DeChambeau for his slow-play antics.

DeChambeau and Koepka supposedly struck a deal at the 2019 Northern Trust later that year, only for DeChambeau to "not hold his end of the bargain," according to Koepka.

Their war of words has since continued ever since, especially in recent months when Koepka further expressed his dislike for DeChambeau during a Golf Channel interview at the US PGA Championship - WATCH HERE

"He [Bryson] did not like that I had mentioned his name in slow play (back in 2019), so we had a conversation in the locker room," Koepka told the media ahead of The Open.

"Then I guess we said something else in the press conference but didn't mention his name in it, and he walked up to my caddie Ricky [Elliott] and said something. It was 'you tell your man if he's got something to say, say it to myself'.

"I thought that was ironic because he went straight to Ricky. He then told me when I came out, hit a few putts, and then just walked right over to him [Bryson] and we had a conversation.

"So then he decided I guess he was going on that little, whatever, playing video games online (Twitch, in which he made light of Koepka appearing in ESPN's 'Body Issue') or whatever and brought my name up, and said a few things. So now it's fair game."

As for how he will deal with DeChambeau when the pair join up with Steve Stricker's United States Ryder Cup team this September, Koepka explained they will certainly not be playing alongside one another in any of the matches.

"It's only a week," said Koepka. "I can put it aside for business. If we're going to be on the same team, I can deal with anybody in the world for a week.

"I'm not playing with him. I'm pretty sure we're not going to be paired together, put it that way. I think that is kind of obvious.

"It doesn't matter. I don't think we're going to be high-fiving and having late-night conversations. I do my thing, he does his thing.