Bryson DeChambeau FIRES BACK at golf journalist: "I DO SHOUT FORE!"

DeChambeau hits back at claims he fails to ever shout "FORE" at PGA Tour events... 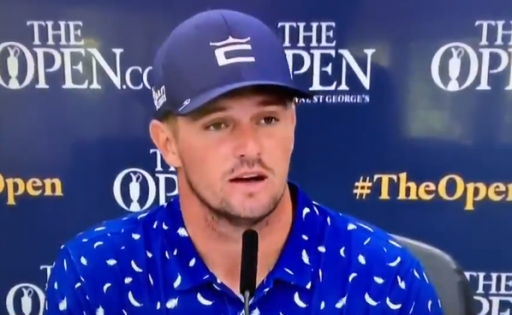 Bryson DeChambeau has fired back at a golf journalist who claimed he does not seem to shout 'FORE' during PGA Tour events ahead of this week's Open Championship at Royal St George's.

Renowned golf journalist John Huggan posed the question to DeChambeau during his pre-Open press conference on Tuesday, just three weeks after the big-hitting American was slammed by golf fans on social media for not shouting 'FORE' with one of his tee shots on the 4th hole at the US Open.

A number of golf fans and critics consider DeChambeau has failed to shout 'FORE' on a number of other occasions out on the PGA Tour.

However, DeChambeau was pretty irate with the comment made by Huggan on Tuesday, claiming he shouts 'FORE' at least 99% of the time when striking an errant shot.

Need this spliced up with the US Open clip of him aiming directly at the crowd on the 4th and picking up his tee while it was mid air without yelling pic.twitter.com/5O4gFlDh1I

"I do shout 'FORE', I don't know what you're talking about," said DeChambeau.

"There's plenty of people on the tee box that do shout 'FORE'.

"You're bringing up a very controversial thing which is unfortunate, but 99% of the time I do, and unfortunately some people think I don't, but that's okay they can think whatever they want."

Here's how a number of golf fans have reacted to Bryson's latest comments:

"Who wants to show Bryson a clip of the 4th hole at Torrey Pines the other day then?"

"He did leave himself 1% just incase…but as a math fan you think he’d leave himself a little more room for error. If anyone knows how tough calculations are it’s Bryson."

"Perhaps this level of consummate, professional lying is the result of spending too much time with the Trumps."

NEXT PAGE: BROOKS KOEPKA EXPLAINS WHAT IS LIKELY TO HAPPEN WITH HIM AND BRYSON DECHAMBEAU AT THE RYDER CUP