Collin Morikawa: BURGERS were the secret to my Open win! 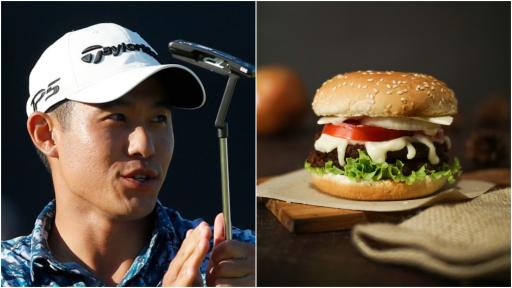 Collin Morikawa has revealed how eating a burger a day at The Lodge at Princes Golf Club - next door to Royal St George's - contributed to him winning The Open Championship on Sunday.

But despite having all facets of his game in check at The Open last week, Morikawa admitted the secret to his success was in the fact he ate a burger every single day - something he had never previously done at a tournament.

"The secret?" said Morikawa. "I never do this, but I had a burger for four straight days. So my body is probably feeling it. I know my body’s feeling it."

Morikawa also admitted he refrained from drinking any alcohol during Open week.

"We’ve been staying at the hotel right by the course," said Morikawa.

"Every night I see all the caddies drink, and I’m like ‘Man, I really want to drink, but I hold back. I hold back on tournament week."

Judging by the snaps we received from Princes Golf Club, next door to Royal St George's, we are fairly certain that changed on Sunday evening...

Morikawa now becomes just the second player after his childhood hero Tiger Woods to win The Open and US PGA before the age of 25, as well as the fourth American to win The Open before the same age (Woods, Spieth and Bobby Jones).

The World No.3 also becomes the first player since Jones in 1926 to win two majors in eight or fewer starts.

NEXT PAGE: MORIKAWA SEEN PULLING CLARET JUG THROUGH THE AIRPORT ON THE WAY HOME!