Collin Morikawa was beaming with pride after winning the Claret Jug at the weekend, so much so that he was spotted hauling it through the airport. 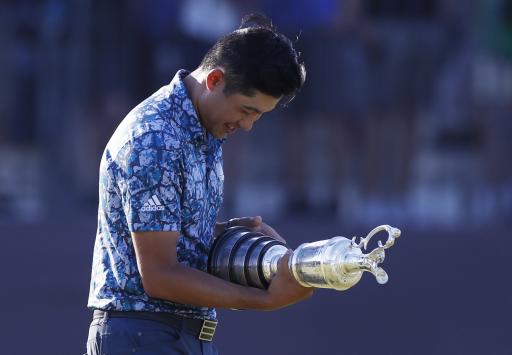 Collin Morikawa said that lifting the Claret Jug and winning The Open Championship was one of the best moments of his life so far.

Morikawa has now won the PGA Championship and The Open on debut. His rise to stardom in the golf world has been almost alien to anyone we have seen in recent years.

However, the popular and likeable American showed that he is just like the rest of us as he was seen hauling all of his luggage through an airport, returning home to the United States.

The World No. 3 looks to be pulling along a case that contains his new, special trophy and one that his name will now be engraved on forever.

The image of Morikawa returning home with one of the greatest prizes in golf was reminiscent of Hideki Matsuyama's victory at The Masters back in April.

The Japanese star, who missed out on The Open this year after testing positive for Covid-19, was spotted with his green jacket at an airport after he won his maiden major title at Augusta National.

It is always great to see the humbleness and pride that PGA Tour players take in their victories, which is why they enjoy carrying their own trophies and commemorative garments as opposed to someone else doing it for them.

Morikawa is only 24 and he now has two major titles and five PGA Tour wins to his name. Just be aware because this won't be his last one, and he could be appearing at an airport near you.

NEXT PAGE: REVEALED: THERE WERE 29 DIFFERENT GOLF BAG SETUPS AT THE OPEN!

The Open
Claret Jug
collin morikawa
hideki matsuyama
The Masters
Previous
Does Rory McIlroy NEED A BREAK from the game to rediscover his BEST GOLF?
Next
How many DIFFERENT BRANDS do you have in your 14-club golf bag?