Darren Clarke won The Open Championship in 2011 and he has made a great start to the Senior Open at Sunningdale. 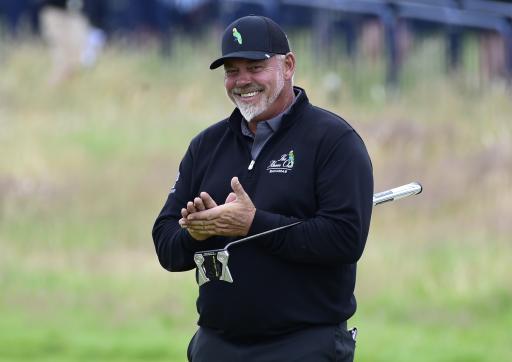 Darren Clarke shot a great opening round of 5-under-par to share the lead at the Senior Open Championship at Sunningdale Golf Club.

Clarke, who is playing in just his second Senior Open, started his round with a birdie on the first hole and continued to play the front nine in 4-under-par.

The Northern Irishman gave one shot back to the course on the par-4 12th hole but this was his only bogey on what was nearly a faultless card from the former Open champion.

Clarke returned to the scene of his greatest career moment last week at Royal St. George's where he lifted the Claret Jug in front of the adoring crowd in Sandwich in 2011.

Pin in or out debate. pic.twitter.com/NIYHfLeeJr

Unfortunately this time around, he failed to make the cut but he has put that behind him and shot 65 in today's first round to co-lead alongside James Kingston of South Africa.

Defending champion Bernhard Langer started well too with a solid score of 4-under-par to sit just one behind Clarke.

Langer won his fourth Senior Open title at Royal Lytham and St. Anne's in 2019 and as last year's tournament was postponed due to the Covid-19 pandemic, he can now defend his crown.

Ernie Els has won two Claret Jugs in his illustrious career and although he is making his Senior Open debut this week, it didn't stop him from shooting 3-under-par at Sunningdale.

The Big Easy made four birdies in his first 11 holes to reach 4-under-par for his day, but he made bogeys on the 12th and 15th holes to fall back down the leaderboard.

The South African made a final birdie at the 16th hole to finish with a respectable 67 to remain in the hunt for his first senior major win.

Michael Campbell endured one of the most embarrassing moments of his career on the 6th tee when he hit the ball on his practice swing!