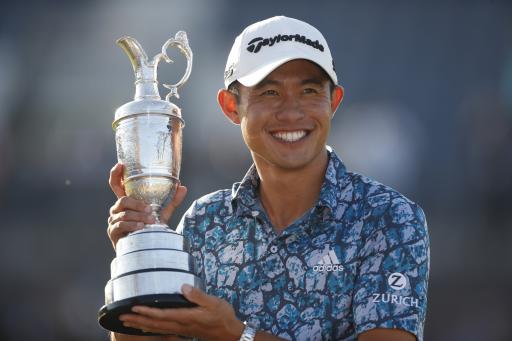 Collin Morikawa has clinched his second career major title in less than 12 months with victory in his first-ever start at The Open Championship.

Morikawa, 24, becomes the first player in the men's game to win two majors on their debut.

The American carded a flawless final-round 66 to finish 15-under par, enough to see out a two-shot triumph over compatriot and 2017 winner Jordan Spieth, who also posted a round of 66.

"It's amazing, I'm not the biggest history guy but to hold the Claret Jug is going to be the best memory I have in my lifetime," said Morikawa.

"To cap it off on my caddie's birthday is even more special.

"I've had belief in myself since day one that I could do this. I wanted to make a statement for myself. I've never played this style of golf before, but I did my work. Last week at the Scottish Open was a huge learning experience for me, and I've put it all together this week."

Morikawa becomes just the 10th player in Open Championship history to win on debut, and the sixth in just the last 100 years - something he also did at the US PGA Championship last year when becoming the third youngest golfer to win the tournament at the age of 23.

He also joins Gene Sarazen, Bobby Jones, Jack Nicklaus, Seve Ballesteros, Tiger Woods, Rory McIlroy and Spieth as the only players in the last 100 years to win multiple majors before turning 25, and he has only played in eight majors.

Now a five-time winner on the PGA Tour, Morikawa moves to a career-best position of third in the Official World Golf Rankings.

Jon Rahm also closed with a 66 to finish in a tie for third on 11-under par with Louis Oosthuizen, who despite leading the tournament for 54 holes stumbled with a round of 71.

Oosthuizen has now incredibly finished tied third or better in four of his last five majors.

Dylan Frittelli took solo fifth on 9-under par, one shot ahead of a fast-finishing Brooks Koepka (65) and Mackenzie Hughes (69).

Dustin Johnson (67) finished a further shot back on 7-under par, with defending champion Shane Lowry (69) back on 6-under par.

Further down the board, Bryson DeChambeau finished respectably with a 65 to finish 2-under par, while Rory McIlroy (71) failed to fire once again to finish level-par for the week.