Golf fans react to Morikawa lifting the Claret Jug and calling it the "British Open"... 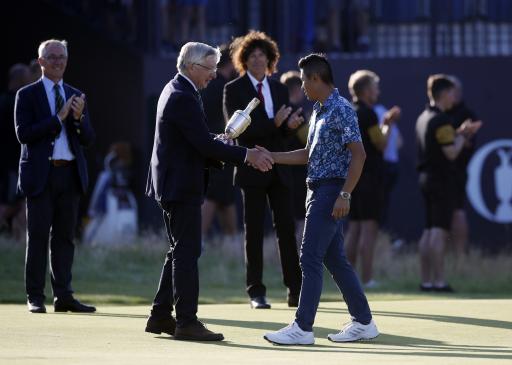 Collin Morikawa etched his name on the Claret Jug at the first time of trying in "The Open Championship", and then told everyone how happy he was to have won the "British Open".

For some reason or another, many an American golfer, critic or commentator still wants to label golf's oldest major as the British Open, but the correct title is in fact The Open Championship.

"He will learn," said Sky Sports Golf's Nick Dougherty, who despite hearing that was full of praise for America's new star.

An absolute statement from Morikawa to call it the British Open right to their faces!

PAIGE SPIRANAC: "DO NOT CALL IT BRITISH OPEN BECAUSE GOLF PEOPLE WILL GET MAD!"

Here's how a number of golf fans reacted to Morikawa saying he had just won the British Open:

A worse look than Bryson with his driver? Collin will have to make an apology statement after this.

in fairness, Willett called it t'US Masters so we'll call it a score draw

Love it! Fuel to the fire for the Ryder Cup

Morikawa becomes the first player ever to win two different majors on debut as he picks up his second major title in just his eighth major start.

The win also marks the fewest number of major starts to win two majors since Bobby Jones in 1926, and he becomes the 10th player to win "The Open Championship" on debut - the first since his compatriot Ben Curtis also won at Royal St George's in 2003.

collin morikawa
The Open
PGA tour
paige spiranac
bryson dechambeau
Previous
Collin Morikawa: In The Bag of the new Open champion
Next
How much they all won at The Open Championship at Royal St George's