Daly takes to social media to express his disappointment at not being allowed a buggy at Royal Portrush. 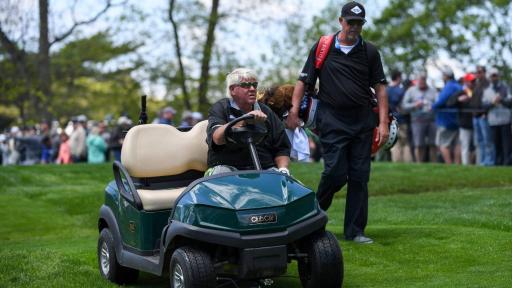 John Daly has been refused the use of a golf cart in the Open Championship at Royal Portrush next week by the R&A.

Daly, 53, was permitted the use of a buggy at the US PGA Championship in May due to degenerative arthritis in his right knee that prevents him from walking more than six holes at a time.

The man nicknamed 'The Wild Thing' became the first player to use a golf cart in a major championship since Casey Martin at the 2012 US Open.

But despite Daly's plea with the R&A to use a buggy at Royal Portrush, the 1995 Open champion was denied.

Daly took to social media to give his feedback on the matter, and explained he will still "give it a shot" at Royal Portrush.

Well done to the @randa for taking a stance and making what I believe is the correct decision regarding golf buggies in Major Championships! Walking is part of the game! @TheOpen #royalportrush

The R&A has since issued a statement which reveals they had "carefully considered" Daly's request.

"We appreciate the difficulty John is facing and have full sympathy for him as this is clearly a serious, long-term condition," read the R&A statement.

"Having considered all of the relevant factors, the Championship Committee has decided to decline his request.

"We believe that walking the course is an integral part of the Championship and is central to the tradition of links golf which is synonymous with The Open."

The R&A statement added that Royal Portrush's terrain is "not suited to buggies and indeed the club does not permit their use".

"This is not a decision we have taken lightly but we believe it is the right one for The Open.," it continued.

"John has a special place in our hearts as a champion golfer and he will always be welcome at the Championship both at Royal Portrush and in future."

Daly also revealed late on Sunday evening that he was rushed to hospital while on holiday after a spider bite, which resulted in severe abdominal pain.

The American reveals all in his latest social post here...

Daly won the 1995 Open Championship with playoff victory over Costantino Rocca. But not before plenty of drama on the final hole...