Woods wakes up well before dawn to get his body ready for Royal Portrush. 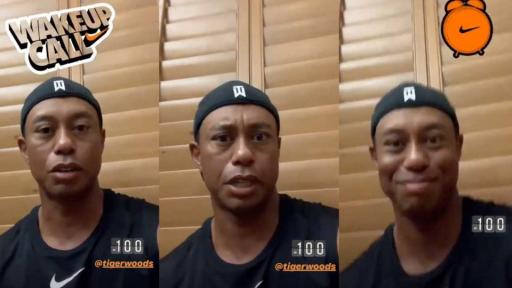 Tiger Woods has revealed he is already adapting to the five-hour time difference at Royal Portrush in Northern Ireland for next week's Open Championship by waking up to train at 1am back home on the East Coast of the United States.

If there was slight concern from Padraig Harrington that Woods was not taking things seriously enough after bypassing tournament action in the lead-up to golf's final major of the year, the 15-time major champion took to his Instagram Story at 1am (US time) to prove otherwise.

WATCH the video here - but be quick, Instagram stories only last 24 hours!

Last weekend, two-time Open champion Harrington claimed he was worried about Woods' desire for a fourth Claret Jug to add to his previous wins in 200, 2005 and 2006.

Woods, 43, has made just nine appearances on Tour this season, including three majors, two WGCS and The Players.

After undergoing four back surgeries in recent times, Woods is much more lenient with his competitive schedule in 2019.

Looking at Woods' major record in the past, when he has gone from major to major in the past, he has only gone on to win twice (1999 US PGA and 2008 US Open).

Not only does a lack of competition worry Harrington when it comes to Woods' chances at Royal Portrush next week, but also his lack of preparation for links golf.

"I was always mightily impressed when Tiger Woods would play in a major without playing the week before," said Harrington, "but I'd be a basket case if I didn't play the week before."

"Different personalities are completely different. But I do think links golf is different. You're giving up some shots if you don't play some links golf in the couple of weeks coming up to it.

"There's no better way to understand your clubbing than when you've got a card in your hand, and if you under-club then there's a little bit of pain and you remember it."