Jon Rahm: I'm going to hit driver as much as possible at The Open

Big-hitting Spaniard believes driver is the prudent play at Carnoustie this week. 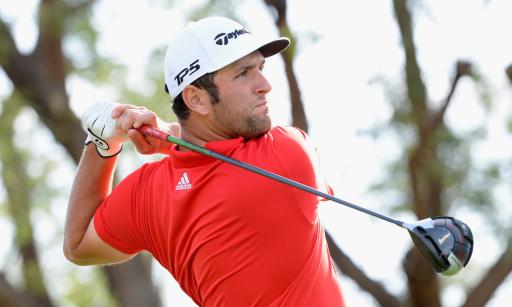 Jon Rahm has revealed he will be taking driver as much as possible during The Open Championship at Carnoustie this week.

Rahm, the world number five, is bidding to win his first major championship but has yet to enjoy much success in two previous tries at The Open with a tie for 59th in 2016 and a tie for 44th in 2017.

But the big-hitting Spaniard is ready to play to his strengths on the baked fairways this week.

“As many drivers as I can,” said Rahm on his play off the tee this week following his early practice round with Rory McIlroy. “I just feel comfortable with it.”

One hole in particular where Rahm feels driver is necessary is down 18.

“But if you hit a good one with a driver, you’re going to have nothing to the green.

“If you hit the rough this year, it’s not as thick as other years. You actually get a lot of good lies, so you can still hit the green with confidence.”

Carnoustie may have proven one of the toughest Open tracks down the years, but Rahm believes with current conditions in the players' favour, the famous links could be there for the taking this week.

“But with this much sun” – it hasn’t rained much, if at all, over the past six weeks – “the fescue grass can’t grow. It just dies,” said Rahm.

“It’s a lot thinner than other years, so unless they can magically grow it thicker the next few days, it’s pretty safe to assume we can be aggressive.”