Kevin Kisner plays final round of The Open in 150 MINUTES!

Kisner flies round Royal St George's on his own in two and half hours, and even shoots 68 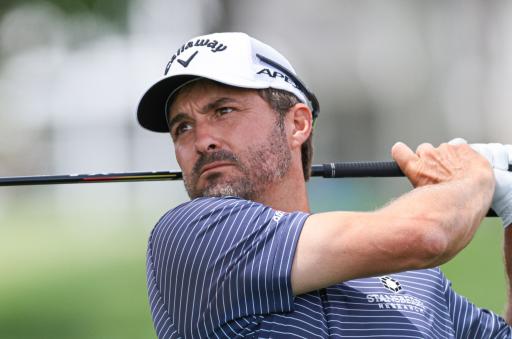 Kevin Kisner was lying solo 77th in last position as he stood with hands on hips on the 1st tee at The Open. Let's just say he was not prepared to hang around for the victory speech.

Kisner was already regarded as one of the fastest players on the PGA Tour prior to his final round at Royal St George's, but he took things up a notch on Sunday by playing 18 holes in exactly two and half hours (150 minutes).

To his credit, he even shot a round of 2-under 68 for his lowest round of the week as he went on to finish solo 73rd on 5-over par.

18 holes in 2.5 hours. This ain't no hobby @TheOpen pic.twitter.com/ZpDGv0dbJF

Here's how a number of golf fans reacted to Kisner's round.

I literally walked off the course today because it took 2.5 hours to play 7 holes.

Almost an hour later, the second group of the day behind Kisner, Poom Saksansin and Richard Mansell, are currently playing the 17th hole. https://t.co/mZbRjj2Gpr

Considering my fastest round with a cart at the local muni is 2-1/2 this is damn impressive.

I hope you get picked for RCUP. Get the singles done before 1pm NFL kickoffs. You can do this.

This should be every amateur golfer’s goal. Thank you.