Bryson DeChambeau on Open struggles: "I don't think I'll ever figure it out"

DeChambeau admits he is learning more and more about Open Championship style golf... 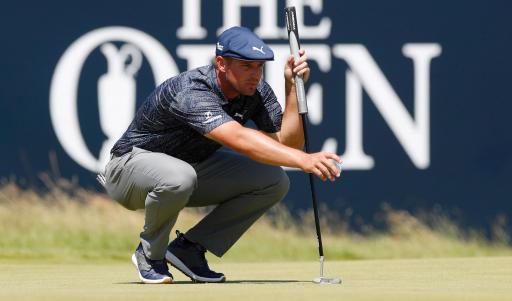 Bryson DeChambeau finished with a respectable 5-under 65 in the final round of The Open at Royal St George's on Sunday, but then told the media he is unsure he will ever be able to figure out how to play links golf properly.

DeChambeau's week got off to a controversial start as he hit back at a golf journalist who quizzed him on why he rarely shouts 'FORE' off the tee, and things then got even worse when he said 'the driver sucks' after his opening round of 71 on Thursday.

The big-hitting American made the cut on the number (1-over par) and despite adding a 72 on Saturday to fall even further out of contention, rallied late on Sunday with a bogey-free 65 to finish tied 33rd on 2-under par and 13 shots behind winner Collin Morikawa.

DeChambeau's tie for 33rd marks his best finish at an Open Championship in just four starts, following two missed cuts at Royal Portrush and Royal Birkdale, and a tie for 51st at Carnoustie.

"Finishing 5-under is a good feat given it's the Sunday of an Open Championship, and I think that I'll learn a lot from this going into next year," said DeChambeau.

"It's one of those things that for me it's going to take time probably to learn the whole ins and outs of Open golf.

"I don't think I'll ever figure it out, but hopefully one year I can get some of the right breaks going for me and hitting really good with all facets of my game and give myself a great chance to win an Open Championship."

WATCH: BROOKS KOEPKA FIRES YET ANOTHER SHOT AT BRYSON DECHAMBEAU AT THE OPEN

DeChambeau added: "There was a few times where the driver got me into a few bad places, and then obviously I had a couple of 4-irons get me into bad places yesterday.

"It's difficult out here. You've got to really manage yourself and make sure you're hitting it right parts of the fairway.

"It's one of those things that, as time goes on, I'll keep learning more and more about Open Championship style golf, and one day again hopefully I can hold up the Claret Jug.

"That would be awesome. One of those things I'll keep learning over the course of time."