Monty just said THIS about Bryson DeChambeau and St Andrews - do you agree?

Colin Montgomerie fears Bryson DeChambeau and other PGA Tour bombers will drive a number of the greens in one at The Open. 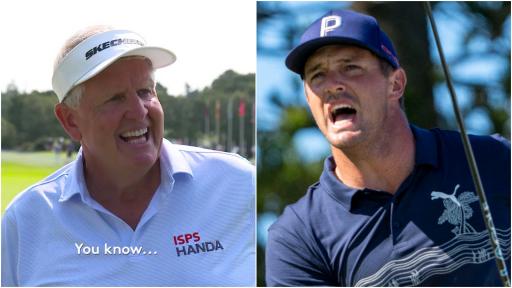 Colin Montgomerie believes the PGA Tour's biggest hitter Bryson DeChambeau could make a mockery of the famous Old Course at St Andrews when he competes in the 150th Open Championship this July.

Montgomerie, 58, speaks with great pride of the Home of Golf as a Scottish player himself but he also fears The Open may never return to St Andrews as a result of players hitting the majority of the par-4s in one.

The eight-time Order of Merit winner thinks DeChambeau may even be able to drive up to seven of the greens on par-4 holes, and that he will have a flick of the wrists with a wedge into the par-5 5th.

"Can you imagine what will happen if the weather is good and there's little wind," said Montgomerie, who lines up in this week's DP World Tour event in Abu Dhabi.

"It hardly bears thinking about. Bryson will stand up there and think six or seven holes on the course are driveable.

The iconic par-4 18th will always become a bit of a joke, at least in the eyes of the 31-time European Tour winner.

"As for the 18th, remember all the excitement back in the day when Jack Nicklaus became the first man to drive the green? They were hitting it with 3-woods back when I finished second to Tiger in 2005 and this year they will be hitting it with irons.

"That would be really sad if that happens."

NOW WATCH: HOW LONG WOULD IT TAKE YOU TO COMPLETE THIS EPIC HIDEKI MATSUYAMA PUTTING DRILL?