How long would it take YOU to complete this epic Hideki Matsuyama putting drill? 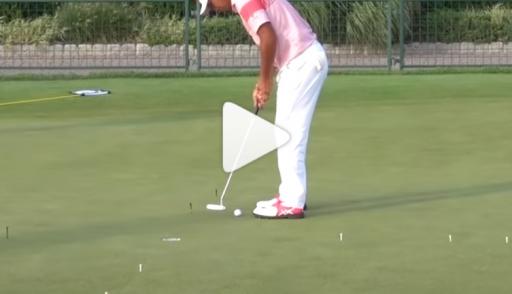 Golf fans have been reacting on social media to Hideki Matsuyama's incredible putting drill en route to his victory at the Sony Open at Waialae Country Club on the PGA Tour last week.

Matsuyama overhauled a five-shot deficit on long-time leader Russell Henley with nine holes to play, before ousting him at the first extra hole following one of the greatest fairway woods ever seen on the PGA Tour.

While the Masters champion's long game and iron play was impressive in Hawaii last weekend, it was his putting, an area of the game that it's fair to say usually holds him back from winning more tournaments, that excelled most.

WATCH: HIDEKI MATSUYAMA HITS THE SHOT OF THE YEAR SO FAR TO WIN THE SONY OPEN

Matsuyama led the field at the Sony Open with a career-best Strokes Gained: Putting statistic of +7.537.

That probably had something to do with his epic golf putting drill, which was posted onto the PGA Tour Instagram page.

As you can see from the video below, Matsuyama has tee pegs set out at different measurements.

The goal is for him to hole three putts in a row before moving to the next tee peg.

Hideki absolutely nails it, but it does take some time... how long would it take you?!

NOW WATCH: THIS HILARIOUS AIR SHOT MIGHT BE THE WORST GOLF SHOT WE HAVE EVER SEEN!