The Open: Bad weather to cause HAVOC this afternoon

Heavy rain showers and strong winds are set to cause mayhem at Royal Portrush during the afternoon of the final round of the 2019 Open. 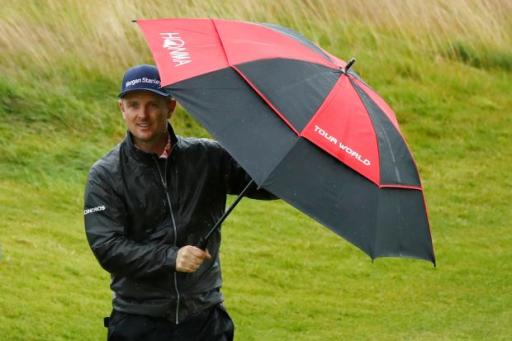 For an Open Championship, the weather at Royal Portrush in Northern Ireland this week has been pretty tame. On Monday and Tuesday, the weather was fantastic, with the sun making an appearance and players making it around in just a polo shirt, but it's all predicted to change on Sunday afternoon.

Every year at the Open, you expect (and hope) that the weather is going to cause problems so we can all sit in the comfort of our homes and see some proper links golf.

So far at Royal Portrush, the weather has been very kind, but that's all about to change on Sunday afternoon, as we are expected to see the real Irish weather on the links of Portrush.

Weather forecasts have predicted winds as strong as 40mph on Sunday afternoon, as well as a quarter of an inch of rain, hence why the R&A made the decision to change the tee times, making them about two hours earlier.

Many golf fans took to Twitter to share their thoughts on the R&A's decision to pull the tee times forward, disappointed that they were trying to avoid bad weather at an Open, but there's more to consider than just the entertainment of a difficult round of golf.

With winds of up to 40mph, players teeing off in the afternoon will see their balls rolling off the green and flooding late in the afternoon could mean the Open doesn't even finish on Sunday.

Spectators would likely depart to find shelter before the weather causes travelling problems. The decision made by the R&A isn't just for the players, it's for the safety of the thousands of fans who need to think about getting home after the Open.

Danny Willett, who is a part of the afternoon pack, said: "10-, 15-mile-an-hour winds and raining, this place will be a completely different kettle of fish. This place will grow some teeth again."

The expected bad weather does make the final round a lot more interesting, with chasing players knowing that Shane Lowry, who is currently leading the tournament and will be in the final group, could have plenty of problems coming his way.

"I’m going to be in aggressive mode,”  said Tony Finau. "It’s trying to win the tournament. I’m not trying to come close."

"It offers you a little bit more hope than if it was a benign day," said Justin Rose, another player in with a chance on Sunday.

Shane Lowry will have his work cut out this afternoon as he looks to win his first major championship, but as an Irish local, he's played in worse conditions.