Tiger Woods will miss the cut in the Open after he failed to salvage his shocker of a first round. 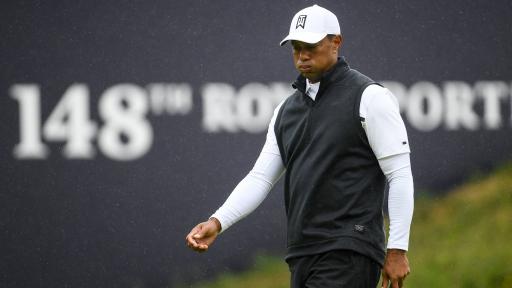 Tiger Woods will miss the cut going into the weekend of the Open at Royal Portrush, even after shooting a one-under round of 70 on Friday.

Tiger Woods is the first Masters champion to miss the cut in both the PGA Championship and the Open since 1999.

It looked pretty clear after his first round on Thursday that Woods would struggle to make the cut, but if there was anyone who could prove the doubters wrong it was Woods.

Unfortunately, a one-under score of 70 on Friday will not be enough for Woods to make it into the weekend, with the current projected cut looking to be either one or two over par.

Woods had a very disappointing first round, shooting seven over par and only making one birdie all day. After his round, the 15-time major champion revealed that he is struggling with his back and couldn't move the way he wanted to.

Some thought that Woods would pull out of the tournament, but that wasn't the case. A resilient Woods gave it his all on Friday and put together a much better performance to finish under par.

He made four birdies compared to one he made on Thursday, and his iron play looked far more solid. Woods also looked to be a little looser, after receiving treatment for his back post-round on Thursday.

The missed cut is just the third Woods has missed in all of his Open Championships, having missed the cut in 2009 and 2015. It's also the first time in his career that he has missed two major cuts in the same year he's won a major title.

“It’s more frustrating than anything else because this is a major championship and I love playing in these events," said Woods, speaking after his second round at the Open. "I love the atmosphere. I love just the stress of playing in a major. And unfortunately, I’ve only had a chance to win one of them and was able to do it. But the other three I didn’t do very well."

Tiger was asked whether he would be playing in the WGC event in Memphis next week, the next stop on the PGA Tour, but Woods was quick to inform he has no intentions of playing.

“I just want some time off just to get away from it. I had a long trip to Thailand and then trying to get ready for this event, to play this event, it’s been a lot of travel, a lot of time in the air, a lot of moving around and different hotels and everything. I just want to go home.”