YouTube sensation Rick Shiels shares comical story from The Open, and then admits he now has a "feud" with Brooks Koepka. 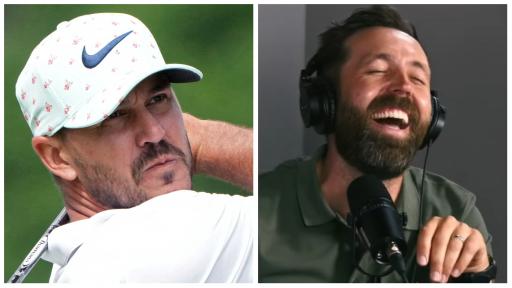 Golf YouTube sensation Rick Shiels has revealed a hilarious story as to how he was removed from a VIP section of a club by four-time major champion and LIV Golf player Brooks Koepka during the 150th Open Championship at St Andrews.

Rick, speaking on his popular 'Rick Shiels Golf Show' alongside Guy Charnock, told his viewers about the incident that happened in the popular St Andrews establishment called 'The Vic' on Saturday night, which was 24 hours after Koepka had missed the cut at the Home of Golf.

WATCH THE VIDEO BELOW - Rick and Guy discuss the Brooks Koepka incident from 13:30 in the video:

"So it's Saturday night, I'm out and having a nice time, just as I was Tuesday, Wednesday, Thursday, Friday, Saturday and Sunday night... St Andrews is a good place for this, lots of good places... shout out to Dunvegan who very much looked after me with a VIP pass, a shout out to Sounder Bar, which also looked after me, and also to an establishment called 'The Vic'," said Rick.

"Now 'The Vic' is the place where you end up at the end of the night. I didn't realise St Andrews had this establishment, which I absolutely fell in love with, okay?

"So luckily enough I got quite friendly with the manager after spending just about every single day in there, I spent a lot of money in there... I've not checked my bank account yet... so I walk in, through I go and they tell me they've got Brooks Koepka upstairs in VIP... I think 'sweet'.

"It was just me with my pal Neil. So the manager says he will see if he can get us in VIP. I said 'okay great, that sounds good.' He said he would go and introduce us to Brooks. I said 'I don't know Brooks, never met him in my life', and he said 'it's alright let's go and find out.'

"So we go upstairs... it's VIP but it's not VIP, it's just a bit of a roped off area. Just IPs. So we get to the rope, there's a security guard there and it's busy, quite popping. Then a guy in VIP who I didn't know, puts his hand up and says 'these two can come in'. So I'm looking around thinking whatever, walking in, this is alright isn't it, champagne everywhere, I'm having a good time. I'm thinking this is where I could turn into Shielsy in a minute!

"So I'm in there. I lasted, Guy... a grand total of 90 seconds. I come in, it's like a U-shape VIP bar. I go round the corner and end up talking to Sam Westwood, Lee Weswood's son, who reckons he can beat me. I'm like okay whatever, no problem. That conversation was short and very brief, and then I turned to my left and I see Brooks.

"So I see Brooksy, here's there, I'm thinking this is cool. I might introduce myself. Dream scenario... he will come up to me and give me a big hug and say 'Rick, love your videos pal, that was the dream, let's have some champagne, let's have some Sambuca.'

"He missed the cut, this was Saturday. I'm like here we go, Brooksy. So I turn to him and he looks at me right in the eye and he taps the security guard next to him, the bouncer, turns back to me, points at me, points at my mate Neil, and then indicates to the bouncer to remove us from the VIP section.

"I'm like what have I done to offend Brooks Koepka?! So I'm like this is really embarrassing now... 90 seconds ago I walked in here like cock of the land and now I'm walking out with a tail between my legs.

"This is now a feud... Brooks Koepka why did you kick me out of VIP? What happened?!"

Watch the rest of the episode here