Rory McIlroy HITS A BALL BOY and the ball goes IN THE HOLE at The Open!

McIlroy hits a chip shot that goes in the cup off the ball boy at The Open! WATCH THIS... 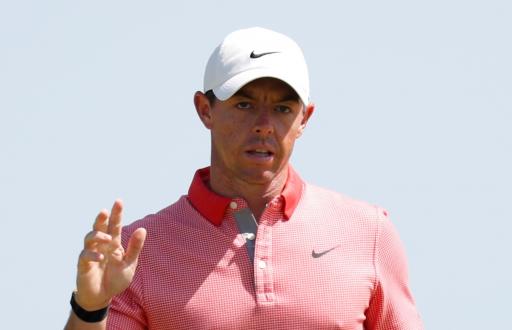 Ahead of teeing up for his third round of The Open at Royal St George's this morning, Rory McIlroy was seen holing out a chip shot on the short game area that struck the ball boy on its way into the cup!

The video was posted by @mikes3dlife on Instagram with the caption 'Rory hitting a ball boy at the open, whoops!" In the video, you can hear McIlroy shout 'FORE' as the ball heads towards a lad picking up balls on the green. He then also said 'sorry!'

Incredibly if you watch closely, the ball clips off the ball boy and goes down into the cup.

"He twirled the heck out of it too," wrote one golf fan.

Another commented: "At least he shouted 'FORE', it's more than Bryson would have done!"

"Shouldn't have been standing there," wrote another golf fan.

"Nothing stops Rory from a club twirl," said one golfer.

McIlroy has it all to do in the third round if he is to win a second career Open Championship as he starts 11 shots off the pace on level-par following consecutive rounds of 70.

The Northern Irishman made a solid start on Saturday racing to 4-under par thru nine holes, but he would hand back three of those shots on the back nine to fall back to 1-under par.