Justin Thomas gives his take after hearing Bryson DeChambeau say "the driver sucks" at The Open... 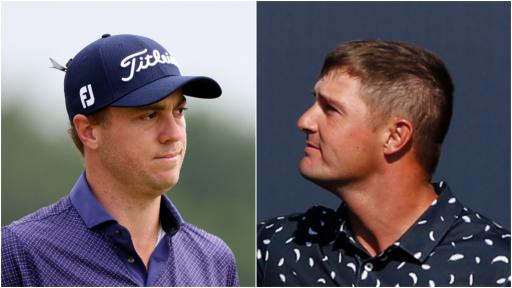 Justin Thomas was one of a number of golfers to criticise Bryson DeChambeau over his choice of words about his Cobra driver at The Open on Thursday.

"Never would've thought swinging at 135+ mph it'd be hard to drive it straight," wrote Thomas, who carded a 67 on Friday to move to 1-under par for the tournament but 10 shots off the pace.

After hearing about DeChambeau's criticism of his Radspeed driver, Cobra Tour rep Ben Schomin did not hold back in his thoughts.

"Everybody is bending over backwards," Schomin told Golfweek.

Other players to take to social media to hit out at DeChambeau's driver comment included former World No.1 Luke Donald and former US PGA champion Jason Dufner.

Don’t bite the hand that feeds you…comes to mind https://t.co/xPV0JFYmm3

If you really wanna get USGA serious about equipment rollbacks, just start blabbering about how your equipment doesn't go straight enough on miss hits.. that should get the ball rolling on things

WATCH: BROOKS KOEPKA SAYS "I DROVE THE BALL GREAT, I LOVE MY DRIVER!"

DeChambeau, who apologised for his comments via a post on Instagram, carded a level-par 70 on day two to narrowly make the cut mark on the number.

Interestingly, he used a Cobra Radspeed driver but in a different version.