Tommy Fleetwood received plenty of negative comments on Twitter regarding his Nike polo at round two of the Open. 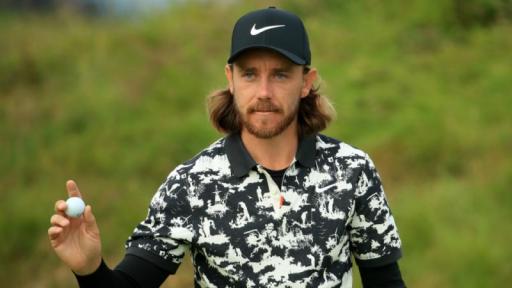 Tommy Fleetwood surged up the leaderboard on Friday as the Englishman hunts for his first major championship, but it was his Nike polo shirt that received most of the attention.

Tommy Fleetwood and the Open is a combination that golf fans around the world believe is destined to spark success at some point in the near future and the way he has started the first two rounds of the tournament at Royal Portrush, you can see why.

Europe's Ryder Cup hero got off to a very solid start in round one, finishing three under par in a bogey-free round, something that was proving very difficult at Royal Portrush on Thursday.

On Friday's second round of the 148th Open, the bogeyless run came to an end at the very first hole, but Fleetwood bounced back with two birdies to finish the front nine at one under par.

The back nine was even better for the 28 year old, with four more birdies and just one more bogey coming at the dreaded par-3 16th 'Calamity,' giving Fleetwood a final second-round score of 67.

Fleetwood's current score of seven under is good enough for T3, with fellow Englishman Lee Westwood.

Now Tommy might be a free agent when it comes to club deals, but he still has a clothing deal with Nike. Four of Nike's athletes, Jason Day, Tony Finau, Thomas Pieters and most recently Fleetwood, have all taken turns wearing one of Nike's latest polo shirts, a graphic black and white design.

Due to the significant coverage Fleetwood received today, he was in the firing line of multiple viewers, who were far from impressed with the shirt from Nike.

After his round, Fleetwood was asked about the shirt and his thoughts on the amount of negative comments the Nike garment had received.

“I personally like it,” Fleetwood said. “I’ve got more comments than I thought, actually, so maybe I have a bit too much of a colorful style because I just thought it was normal.”

Check out some of the tweets directed towards Fleetwood and his shirt below:

Tommy Fleetwood is eventually going to win one of these. Just not in that shirt. #notforposterity

Not sure about the shirt choice for Tommy Fleetwood today though...#TheOpen pic.twitter.com/MBl0eOUyk9

Great to see Tommy Fleetwood leading @TheOpen as he's a top bloke but that shirt is one of the worst I've seen since this one.... pic.twitter.com/jMDSU8wLvZ

I'd really like to see Tommy Fleetwood win a major, but seeing him play in that monstrosity of a shirt he's wearing is making me reconsider that stance.

I'd really like to see Tommy Fleetwood win a major, but seeing him play in that monstrosity of a shirt he's wearing is making me reconsider that stance.

Previous
WATCH: Hilarious Open Tiger Woods impression from Conor Sketches
Next
Tiger Woods will miss the cut at the Open - "I just want to go home"