Tiger Woods has admitted his back is causing him trouble after a poor first to the Open at Royal Portrush. 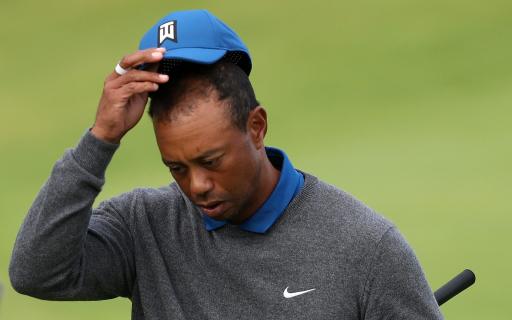 Tiger Woods hadn't played a competitive round of golf since the U.S Open at Pebble Beach, due to his back and neck starting to cause him some pain. Woods believed that a rest was needed if he was going to be able to play well at Royal Portrush as he seeks Open No.4, but it seems the rest wasn't quite long enough.

Woods started the 148th Open pretty well, getting up and down from the bunker on the first to make a par and following that up with three more in a row.

The 15-time major champion then dropped four shots in three holes and looked to show a few signs of pain in his face. Commentary was unsure if the wincing was due to his back playing up or just the poor golf he was producing.

The struggle continued and Woods just couldn't get going. He finally made his first and last birdie of the day on the par-4 15th and the over-the-top celebration summed up his poor day.

A bogey on 18 left Woods, now 43 years old, with a seven-over-par score of 78, leaving him way down the leaderboard in T144. Speaking to the media after his round, Woods didn't shy away from the physical battle he had just endured.

“I'm just not moving as well as I’d like,” said Woods. “Unfortunately, you’ve got to be able to move, and especially under these conditions, shape the golf ball. And I didn’t do it. I didn’t shape the golf ball at all. Everything was left-to-right. And wasn’t hitting very solidly.

“I didn’t do much out there today,” he added. “I hit a lot of missed shots, they were all left. Wasn’t hitting it solid. Everything was off the heel. Just trying to scrape it around. Best I could do was seven over.”

Woods blamed a poor warm up for his inability to play certain shots that links golf demands of you and when questioned on how concerned he was about the state of his back, the 2019 Masters champion made no effort to put a positive twist on things.

“As I said, one of the reasons why I’m playing less tournaments this year is that I can hopefully prolong my career, and be out here for a little bit longer.”

What interested a lot of the media was Woods admitting that home life is more of a strain on his injury problems than playing golf.

“If I am at home and have school pick-up and soccer practices, I’m a lot more sore than I am now. But playing at this elite level is a completely different deal. You’ve got to be spot on. These guys are too good, there are too many guys that are playing well and I’m just not one of them.”

“I’m not 24 anymore,” he said. “Life changes, life moves on. And I can’t devote, as I've told you this many times … I can’t devote the hours to practice like I used to. Standing on the range, hitting balls for four or five hours, go play 36, come back, run 4 or 5 miles and then go to the gym. Those days are gone, OK?

“I have to be realistic about my expectations,” he added, “and, hopefully, peaking at the right time. I peaked at Augusta well. And hopefully I can peak a few more times this year. … I’m going to have days like this, and I’ve got to fight through it. And I fought through it. Unfortunately, I did not post a very good score.”