Stenson lets his emotions get the better of him after shocking shank on 17th hole at Royal Portrush. 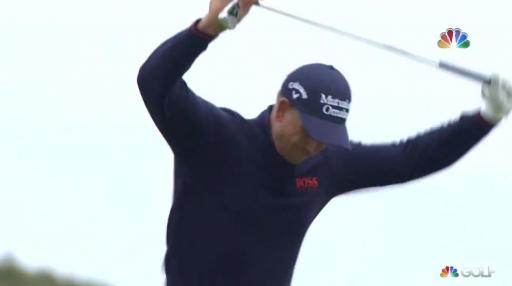 Henrik Stenson was caught snapping his golf club after hitting an outrageous shank on the par-4 17th during the final round of The Open at Royal Portrush.

Stenson has long been considered one of the best iron players in the world, but he made us all feel a little bit better about our own games when shanking his approach shot in the penultimate hole.

The hosel rocket ended up out of bounds, miles right of Royal Portrush's 17th fairway, and of course, well, it was the golf club's fault!

Watch the video below to see Stenson's club snap.....

A shank from Henrik Stenson and a broken iron over the leg. pic.twitter.com/qEQd7PXYmw

The former Open champion endured a final day to forget on the links in Northern Ireland with a closing 5-over 76 leaving him tied 20th on 1-under par.

Stenson was 3-over par through six holes before making a birdie at the seventh, but then handed another back at nine to go out in 39 shots.

Having found the fairway in customary Stenson fashion at 17, the Swede then shanked his short iron well right of the gallery in the blustery conditions.

Stenson then snapped his iron over his knee before putting his shaft over his head.

Ireland's Shane Lowry went on to claim his maiden major title with an emphatic six-stroke victory over England's Tommy Fleetwood.

Lowry carded a 1-over 72 in the final round to finish on 15-under par.

"I definitely wouldn't be standing here without them," said Lowry. "My family, what can I say... my mum and dad."

"They sacrificed so much for me and I'm so happy I can give them this trophy tonight."

American Tony Finau finished solo third on 7-under par, with Lee Westwood and Brooks Koepka a further stroke back on 6-under par.