Will Zalatoris with the BEST and WORST shots of day one at The Open!

Zalatoris hits stunning hole-out for eagle at 12, but then has a case of the yips from a foot at 17... 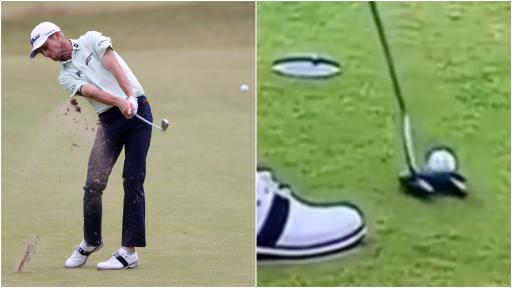 Will Zalatoris produced a moment of magic on day one at The Open, but also threw in a contender for the worst putt you will ever see in a major championship!

Let's start with the good news at least.

Zalatoris carded a round of 1-under 69 at Royal St George's to continue his major rise in the game, reflected none better than finishing runner-up in his Masters debut at Augusta National in April.

He made a bogey at the 11th but then produced some of the biggest roars of the day when spinning his second shot at the par-4 12th into the hole for an eagle-two.

And here is how he did it

Zalatoris would play the next four holes in level par following a bogey at 13 and birdie at 16, but he then came unstuck with a dreaded yip from a foot at the par-4 17th and it would lead to a bogey.

If like me you suffer from the yips now and again, you will probably want to look away now. The stroke certainly raises question marks over how effective the popular arm-lock putting method really is, that's for sure.

How it started vs how it's going: pic.twitter.com/c5xPvVsvV7

Zalatoris, understandably shocked by what just happened, also went on to bogey the 18th hole to end up carding a round of 1-under 69.

UPDATE: Zalatoris has now withdrawn from The Open through injury. It is understood the American hurt himself when hacking his ball out of the rough.